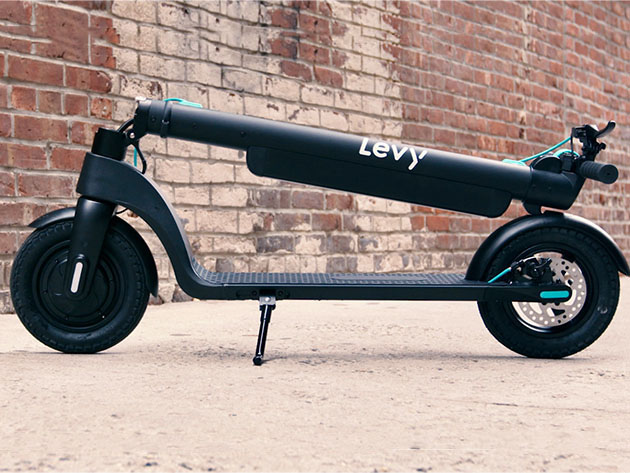 If you don’t have to drive, why should you? For many, a car or truck is the only feasible way to get from place to place. But if you live in a mostly urban or suburban setting with your job, grocery store and most of your major destinations no more than a few miles away, the cost-effective and eco-friendly way to get there would be to leave the car at home.

It’s a lot more doable than you might think, especially when you consider that the average car trip distance is actually less than six miles.

We’re guessing you don’t want to walk everywhere, so the next best thing is a quick, easy transportation method for short jaunts around town — which brings us right to an option like the Levy Plus Electric Scooter.

The Levy Plus is battery powered with a range of up to 16 miles on a single charge, well within the range to handle most simple round trips to the coffee shop, convenience store, doctor’s office or your friend’s house.

Powered by a 350W motor, you can breeze along anywhere you need to go at around 18mph. When not in use, the Levy Plus is so ultra-portable that you can literally fold it up and stash it in the closet until you need it again.

But in case you’re worried about running out of juice while you’re out in the world, the Levy Plus is one of the only scooters of its kind featuring a removable battery pack. So if you find you’re running low, you can actually quickly swap in a new fully charged battery pack and keep moving without missing a beat.

The Levy Plus is also equipped with bright LED headlights and taillights, so you can even ride safely in dark or nighttime conditions.

All those features were enough to make electric vehicle blog Electrek proclaim the Levy Plus “a definite winner...that stands out from the rest of the pack.” And once you give it a try, we’d be surprised if you didn’t agree.

Right now, the Levy Plus Electric Scooter is already on sale for $699.99, $100 off its regular price. But on top of that, you can also save an extra 15 percent off your purchase by entering the code SPRINGSAVE15 at checkout. That brings your final total down to only $549.99.