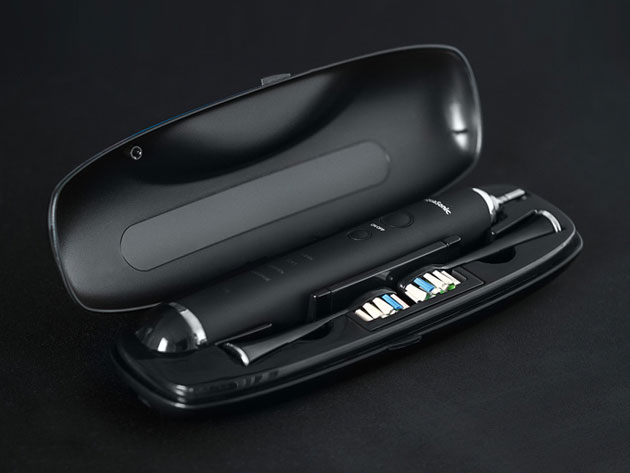 Of course, you know an electric toothbrush does a far better job cleaning your teeth than one of those plain ole non-electric manual tooth brusher thingys. But you might not realize that a sonic toothbrush is actually another quantum leap forward from a boring old electric model.

So in case you’re still slinging an old electric or even one of those with just bristles and a handle, we’ve got a handful of options for upping your brushing game. And by using the code SPRINGSAVE15 at checkout, you’ll get an added 15 percent off your total purchase.

Give sonic a try

In case you’re not sold yet on the joys of sonic toothbrushing, there are a pair of options worth checking out for under $30.

The Triple Bristle GO Battery Powered Sonic Toothbrush ($21.24 after discount; originally $29.99) targets the gum line while brushing all three sides of the tooth at the same time. Holder of a 4.5 out of 5-star rating on Amazon, the Triple Bristle GO not only delivers the deep cleaning of a sonic device, but it’s also cordless, making it a perfect travel brush as well.

Meanwhile, the ProSonic Ultra Whitening Sonic Toothbrush with 4 Brush Heads ($25.45 after discount; originally $79.99) delivers all those 40,000 strokes per minute in one of four user modes: gentle, daily, whiten or polish, allowing you to pick which cleaning style works best for you. It also features a built-in timer so you’ll also know when to start cleaning a different area of your mouth, and a long-lasting battery that can run up to 21 days on a full charge before warning you it’s out of juice.

Aquasonic brushes get their name from fluid dynamics, the way their brushes agitate fluids surrounding the teeth to dislodge plaque that ordinary bristles can’t reach.

With the Aquasonic Black Series Toothbrush and Travel Case ($39.99 after discount; originally $139.99), that plaque removal happens in overdrive, with about 10 times better performance than a traditional brush. In addition to the 40,000 vpm motor powering strong oral hygiene, the Black Series also includes eight replaceable brush heads so you’ll always premium bristle action, even months after purchase.

As for the Aquasonic PRO Toothbrush with Wireless Charging Glass and Case ($54.99 after discount; originally $99.99), it’s got all the bells and whistles of the Black Series...but it’s also got a super cool charging glass. Yeah, we said a charging glass! Just drop the brush in the glass to keep it perfectly energized, then use it to rinse out once you’re finished.

Finally, check out a pair of Platinum Sonic brushes that not only offer high-end ultraviolet cleaning properties, but are actually the deepest discounts in this entire group, each saving you over $200.

For the road warrior, consider the Platinum Sonic Toothbrush and USB Sanitizing Case ($49.99 after discount; originally $259). Once you’re done brushing, just pop the entire unit back into the super portable charging case as the case also bathes the brush in UV light, killing 99 percent of the germs and bacteria the brush collects.

But if you’re staying at home, you can get the same level of protection with the Platinum Sonic Toothbrush and UV Sanitizing Charging Base ($49.99 after discount; originally $259.99). Instead of the carrying case, your brush slides easily into the included charging base, which provides the same UV sanitization process to assure your brush is as sterling clean as anything else you ever put in your mouth.