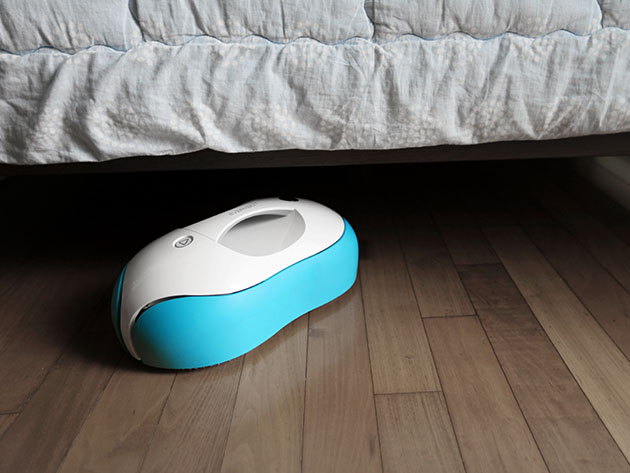 March 19th is the first day of spring. That means it’s time to get off your butt, dig in and start getting serious about cleaning up the house that’s been tumbling into chaos all winter.

If you’re like Snow White, you’ve probably already got a passel of forest creatures all lined up to help out, sweeping floors, washing windows and clearing away the debris of winter. But since this isn’t 1937, we’re going to assume you don’t have that woodland workforce. It’s 2020 — and you need robots. Powerful, healthy strapping robots. Robots who aren’t afraid of getting dirty to get your house clean.

We’ve collected 20 different home cleaning aids, many from the R2-D2 family, to help. Best of all, if you get one right now, you can take an extra 15 percent off at checkout with the code SPRINGSAVE15. Happy cleaning!

With a powerful 5,700RPM built-in motor and a unique, rotating dual-spin mop, the Elicto Everybot RS500 Robotic Spin Mop & Polisher ($237.99 after discount; originally $279) goes everywhere with its soft little microfibers, getting into hard-to-reach corners and clearing out dust like a champ.

In the event you’re willing to expel a little elbow grease of your own to save some money, you can still get deep effective cleaning with the Elicto ES-500 Electric Corded Spin Mop & Polisher ($101.99 after discount; originally $119).  fully adjustable aluminum alloy handle, 180° swivel joint, and 25-foot long cord, you’ll never need to kneel or bend, which is probably just fine by you.

With amazing versatility and premium quality, the Elicto Super Sweeper SS-130 ($21.24 after discount; originally $24) has a groundbreaking 6 blades which roll dust and debris into a ball, comb it from your surface and then perfectly wipe up even the finest remains. Meanwhile, the InstaSweep Hard Floor Surface Sweeper ($21.24 after discount; originally $35.99) packs 3-way, tornadic triple sweep technology that creates a cleaning vortex inside, lifting up dust, dirt and pet hair with ease.

Floor moppers and sweepers are great, but if you’ve got carpets or rugs, you probably need a little more floor cleaning power. The Samsung POWERbot R9250 Robot Vacuum (Certified Refurbished) ($322.14 after discount; originally $699.99) isn’t one of those vacs that gets stuck behind the couch. Smoothly transitioning over different surfaces the POWERbot uses visionary mapping sensors to avoid obstacles while its powerful suction pulls up 50 times more suction to clear all floor types.

But if the R9250 is good, the Samsung POWERbot R9350 Turbo Robot Vacuum (Certified Refurbished) ($355.30 after discount; originally $725) is even better. The CycloneForce technology assures long-lasting suction power with less clogging -- and you can even remotely control the POWERbot right from your smartphone.

Admit it, you’ve always wanted a little robot that’d cruise across your window panes and make ‘em sparkle. The HOBOT 198 Glass Cleaning Robot ($297.49 after discount; originally $399) is your dream. Just download the free app, tap to connect, set it on your window and let ‘er rip. A forceful vacuum sucks out dust, while two cleaning wheels follow up so no streaks get left behind. It’s awesome...but you could also step up the 2019 CES Innovation Award winner, the HOBOT-298 ($365.49 after discount; originally $499). Packed with even more smart features and operation modes, the automatic ultrasonic water spray mist dissolves dust and polish windows at the same time.

Trash duty can be a gross duty. But the Townew, better known as the world's first self-sealing and changing trash can ($89.24 after discount; originally $119.85) replaces the gross with general awe. Just hold the touch button when the trash is full, and the Townew seals your bag automatically for easy removal. Pull out the sealed bag and the lid closes and puts a new recyclable trash bag in its place. You never even have to see, let alone touch the trash again. The only thing the Townew won’t do is take the garbage out to the curb. That’s on you.

Just like those little birds that airlifted Snow White’s laundry on to the clothesline, you need some additional specialized help for some of your more specialized cleaning jobs.

The RevoClean 4-in-1 Drill Brush Cleaning Kit ($21.24 after discount; originally $39.99) actually turns your power drill into a high-powered cleaning tool to cover virtually any surface in your home.

Rather than swabbing bathroom germs around with an old school toilet brush, the LUMI Self-Sanitizing Toilet Brush and Base ($27.19 after discount; originally $39.99) use UV lights to actually kill germs when the brush touches the base.

When your car, truck, bike or even some muddy boots needs a deep cleaning, the Brush Hero Deluxe Set ($42.49 after discount; originally $49.99) attaches to your garden hose and uses a powerful cleaning head brush to get inside hard-to-reach areas and scoop out any mud, debris or other areas that make a big mess.

Your computer screens and TV monitors get pretty dirty too, so the Whoosh! Screen Shine Go + Diamond Defense Protection Bundle ($12.70 after discount; originally $27.99) uses a formula to wipe away dirt and grime while leaving an invisible coating that resists oils, fingerprints and more. Used with the Diamond Defense liquid screen protector, dust can’t take hold and dirty up your gleaming tech.

Canned air is an environmental menace that you can send packing with the X3 Hurricane Variable Speed Canless Air Duster ($101.99 after discount; originally $159.95). The fully rechargeable Hurricane issues a variable speed burst of up to 260 mph to instantly clear out any dust or dirt. The equivalent of over 5,000 cans of a traditional duster, you’ll be ready to clean virtually anything.

And since your car could use some love too, the Mini Cordless Car Vacuum Cleaner ($33.95 after discount; originally $49.99) is smaller than a water bottle but strong enough to suck up all the junk that fall into the cracks of your vehicle. It recharges via USB and with 30 minutes of working time per charge, you can have the spotless car you’ve always wanted at all times.