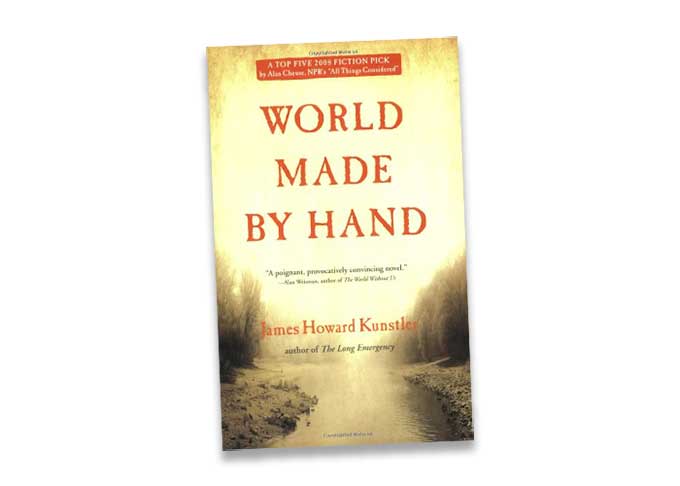 (I originally reviewed this in 2008, but thought it was worth reposting, for obvious reasons. -- MF) In World Made By Hand (2008) by James Howard Kunstler, the population of the United States (and most likely, the world) has been decimated by an energy shortage, starvation, plagues, terrorism, and global warming. The story takes place in an unspecified time in the near future (I'm guessing it's around 2025 or so). Kunstler is the author of the non-fiction book The Long Emergency: Surviving the End of Oil, Climate Change, and Other Converging Catastrophes of the Twenty-First Century, and World Made by Hand is a fictional account of what life might be like if things go the way he describes them in Long Emergency. (Here's a TED video of Kunstler from 2004. Thanks, Erik!)

The story is told by Robert Earle, who used to be a software executive. Now he's a hand-tool using carpenter living in a town in upstate New York without Internet, TV, or newspapers. The electricity comes on every couple of weeks for a few minutes at a time. When that happens, nothing's on the radio but hysterical religious talk. Rumors of goings-on in the rest of the world are vague.

There's no fuel or rubber tires left for cars, and even if there were, the roads and bridges are shot. Earle can't afford a horse or donkey, so when he needs to buy carpentry supplies, he takes his hand cart to a compound on the outskirts of town called Karptown. It's a trailer park next to the dump that's been taken over by a dangerous gang of former bikers and motorheads who roam the neighborhoods salvaging scrap materials from abandoned houses and buildings.

The town is loosely run by a group of 15 men (no women, which is one instance of some offputting mantasy elements throughout the book) who half-heartedly try to maintain law and order, which is hard because no one wants to stand up to troublemakers like the folks at Karptown, who conduct occasional raids on people's homes.

The story kicks off when Earle (who lost his wife and daughter in the plague and hasn't seen his 19-year-old son since the boy took off a couple of years earlier to find out what's happened in the rest of the country) is elected mayor and joins a search party to look for a freight boat and its crew, which disappeared on its way to Albany. Their horse-mounted odyssey takes them on a tour through a post-apocalyptic world of insanity, greed, kindness, corruption, and ingenuity.

While life in Kunstler's world is lawless and harsh and populated with opportunistic characters that make Boss Tweed look like Glinda the Good, it's not without charms. Local communities are active and productive. Neighbors all know each other and look after one another. People grow and trade their own produce and livestock, and meals are tasty -- lots of buttery corn bread, eggs, chicken, vegetables, streaks, fish. They get together and play music a lot, and because people aren't stuck in their living rooms watching TV, they actually attend live performances.

No one can predict the future, and I doubt our future will be much like the one depicted here, but I think Kunstler has described a plausible future that's worth considering.