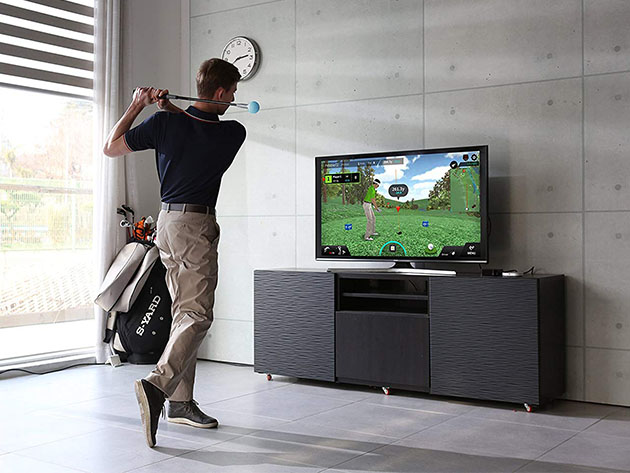 With the world in the midst of unprecedented upheaval, there’s plenty to be concerned about out there. But while there are obviously far weightier issues facing us all right now, a true golfer will admit that being cooped up inside and missing the fairways and greens is its own little personal tragedy.

To help soothe those pangs, check out these six accessories to help make your favorite course seem not so far away.

Putting was never this much fun

The short game can always use some work — and thankfully, the backyard is perfect for something like the Izzo Golf Sharp Shooter Putting Trainer and Game Set ($23.99; originally $29.99). The hanging and swinging targets promote precision while helping you develop just the necessary speed control as well. There are even variable game formats, so putting practice can actually be fun at the same time.

Unlike many cheap knockoffs, the Callaway Executive Putting Mat ($39.99; originally $49.99) is made from high-quality materials that actually make you feel like you’re on a true putting surface. This mat doesn’t put up the creases and folds, so you get truer rolls that require you to gauge your speed just like on a real course. This mat even has a cup that’s a quarter-inch smaller than regulation, tricking you into further sharpening your aim that’ll work like a charm on the larger actual cups. Tricky, Callaway!

Yep, it’s really like golf and cornhole had a baby. Rather than lobbing beanbags, the Chippo Golf Game: The Glorious Lovechild of Golf and Cornhole ($158.99; originally $189.95) challenges golfers to perfect their chip shot, popping the ball up in the air and right on to the Chippo target board — if you’re any good. This backyard sports game is the perfect weekend diversion when the links just aren’t in the cards...and when you still need to make some money off your less skilled golf buddies.

Let’s face it — working on your long game is a challenge when you’re stuck at home. However, the Callaway Home Range Practice System ($159.99; originally $199.99) offers the full swing practice you need to improve those drives.The net is eight feet square with a true-turf service mat that simulates a real fairway. And the pro caddie ball shagger/feeder delivers just one ball, so golfers can slow down and focus on one shot at a time.

If you’re a real power hitter...

Constructed with super strong mesh netting and equipped with an ultra-quiet hanging target, this Callaway 8-Ft Quad Hitting Net ($175.99; originally $219.99) can withstand ball strikes up to 150 mph. Improve that drive while the target assures quick ball collection and return for you can keep up the barrage as long as your arms hold out.  It also pops up easily for quick setup and teardown.

Play for real without ever leaving your living room. PhiGolf: Mobile & Home Smart Golf Simulator with Swing Stick ($199.99 after discount; originally $249) is an app-based golf game that uses your real golf swing to control the gameplay. Set up your easy-to-use sensors, fire up the WGT Golf app, stream it to your TV and suddenly, you’re playing on photorealistic simulations of the world’s greatest courses.

And when you include the code GOLF20 during checkout for this system, you can slice an extra 20 percent off your total. And that better be the last time you slice that severely again.