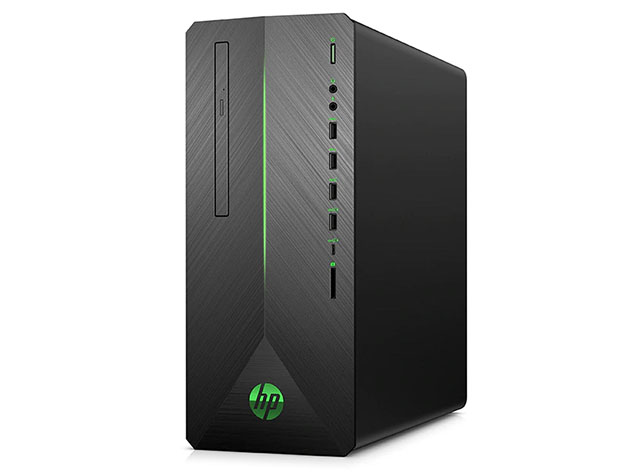 In case you’re one of those computer shoppers who instinctively turns up their nose at the very mention of the word refurbished, here are a couple myths worth dispelling.

With so many buyers focused on transportable tech, big savings are available on the workhorse of the computer industry: the trusty old desktop unit.

The HP EliteDesk 705-G1 Mini PC ($229.99; originally $599.99) is the very definition of dependable and a solid choice for anyone seeking a reliable model to handle everyday computing chores like emailing and web surfing. Mini PCs were mocked for years for being underpowered next to their bigger desktop brothers, but between performance upgrades and space requirements in tight conditions these days, who’s laughing at a mini’s svelte profile now?

Gamers who live and die by graphics innovations that push tech to their limits know the value of having some serious horses under the hood. Therefore, the HP Pavilion Gaming Desktop  ($599.99; originally $899.99) is built for high-octane users. Between the Hexa-core Intel Core i5-8400 processor, the sweet NVIDIA GeForce GTX 1060 graphics card and precision 5.1 Surround Sound Output, this is a rig that will barely break a sweat, no matter what you throw at it.

For those looking to branch beyond HP, the Dell Precision T3420 SFF Desktop ($439; originally $699.99) is clocking a 6th Gen Intel Core i3 processor of its own, ensuring uninterrupted performance, even while you’ve got a handful of running tasks.

And if you’d rather not also drop cash on a monitor, just get the HP 24" All-in-One Touchscreen Desktop AMD ($499.99; originally $699.99). With a respectable  AMD Ryzen 3 processor, Radeon integrated graphics, 8GB RAM, a 1TB hard drive and a spacious 23.8-inch touchscreen, you’ll have a complete system that’s ready to go from your first first plug-in.

Get the portability and speed of a laptop

If you need to stay mobile, but what a device with a little more processing might than most of those handheld models offer, the laptop is still your likely road warrior of choice. And HP is currently serving up three worth an extra close look.

The HP 15.3" Touch ($419.99; originally $999.99) gives you smooth and speedy PC performance, along with built-in security and apps like Mail, Calendar, Photos, Microsoft Edge, and more so your productivity never wavers.

As for the HP Pavilion x360 ($449.99; originally $599.99), its quad core AMD Ryzen 5 processor and 11 hour battery life are big selling points, as are the HD edge-to-edge multi-touch display, a 360-degree flip design and the 1TB hard drive, a generous amount of space by any laptop standards.

Finally, you can never go wrong with HP’s Spectre line like this 13-inch HP Spectre x360 ($1,099.99; originally $1,299.99). Count on impeccable performance with a lightning-fast 8th gen Intel Core i7 CPU for hopscotching from app to app without the hint of a slowdown.

If even laptops feel a little too bulky for your fast-paced lifestyle, you might want to see how a notebook model feels. HP has a pair of notebook-sized models to choose from, like the HP EliteBook 850-G3 ($329.99; originally $791), built with productivity and entertainment from anywhere in mind on its FHD SVA anti-glare micro-edge WLED backlit display; or the extremely powerful HP ProBook 640-G2 ($449.99; originally $1,239.12), running an Intel Core i3-8145U dual-core processor with 2.1GHz speed, Intel UHD Graphics, and 8GB of DDR4 memory for uncompromised performance ever.

Chromebooks have come a long way

With the world’s turn toward the cloud and web-based systems, it’s a new day for Chromebooks. Originally derided as just a Google browser device, so much is accessible and doable through the web now that Chromebooks are on pair with many other devices now -- for a much lower price.

The HP G4 EE 11.6" Chromebook ($84.99; originally $249.99) includes an Intel Celeron N2840 chip, built-in WiFi and Bluetooth and more killer features. Being an Education Edition model, this Chromebook also come with rubber reinforced edges and other protection extras to make sure an unexpected drop doesn’t doom your device once and for all.

Of course, if you’d like to step up to a more generous display, the 14-inch HP Chromebook ($174.99; originally $250) may just suit your needs. It’s even got an enhanced B&O sound system to give any of those videos you’re watched a little extra kick.

Meanwhile, Acer also has some serious value plays as well, including Acer C720P ($99.99; originally $299), with a healthy balance of speed and performance coming from its dual-core 1.4GHz Intel Celeron processor.

If you’re having trouble making up your mind, it’s understandable — there’s a lot out there to choose from. As for Microsoft, they try to break out their products under the Microsoft Surface banner a little differently.

If you can’t choose between a laptop or a tablet, go with the best of both worlds from this Microsoft Surface Pro 4  ($912.99; originally $1,699.99) with an Intel Core i7 processor that offers the performance of a laptop, with the flip features and break-away design to allow you to use it like a tablet.

But if all this examination helps you conclude a tablet is really what’s in your future, there are three different Surface Book models that might fit the bill. You can either get either the Surface Book with the faster 8th gen i7 processor and 256GB of hard drive space ($1,109; originally $2,499.99) or with the 6th gen i7, but a more spacious 512GB drive ($879; originally $2,799.99). Choose what matters most to you.

Finally, you could also go with the Surface Book 2 ($1,100.99; originally $1,499.99), with an Intel quad-core Core i5 processor, a rock solid Surface pen for drawing that feels almost like using a sheet of paper and four different usage modes.