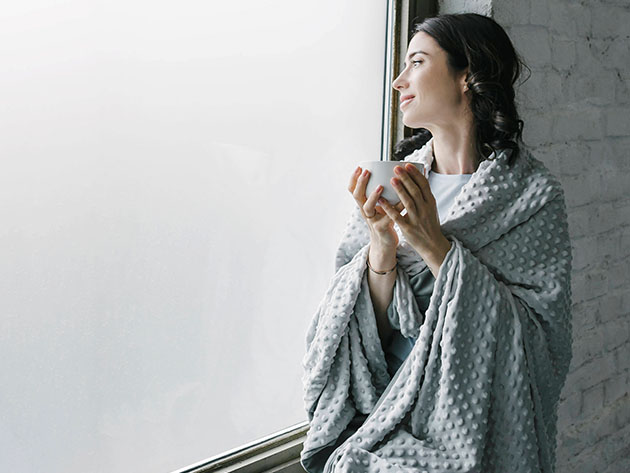 With everything happening now, even the most jaded among us are bound to feel some pangs of anxiety now and again. It’s a crazy time. When we crawl into bed each night, it’s common for our brains to go into overdrive and start thinking — and worrying — about what’s going on and what’s to come.

Under those conditions, anything that offers some calm and soothes our rattled psyches is worth a look. And as strange as it sounds, getting underneath a weighted anti-anxiety blanket actually has been shown to help. In one study, 63 percent of people said they felt lower anxiety after five minutes under a 30-pound blanket. Even 60 percent of those hospitalized after a mental health crisis reported calming effects after using a weighted blanket.

There’s a reason Linus lugged around that blanket all those years. Right now, check out a selection of weighted and other anti-anxiety blankets that can help offer you a more relaxed sleep during these troubled times.

Sometimes, even just snuggling up with something ultra-soft is enough to be calming. Both the Bibb Home Luxury Cotton Thermal Throw Blanket ($24.99; originally $79) and even the wearable CMFY Hoodie: 2-in-1 Hoodie and Blanket ($39.99; originally $69.99) can offer both protection from a chill and some restful, positive vibes.

However, the soothing results of deep pressure touch (DPT), the science of firm, hands-on pressure reducing chronic stress, can’t be ignored. For about the price of a regular blanket, these three — the Kathy Ireland Weighted Blanket ($49.99; originally $99); the Weighted Anti-Anxiety Blanket ($59.99; originally $149.99); and the BlanQuil Basic Weighted Blanket ($84.99; originally $129) — each are filled with tiny eco-friendly glass beads, offering between 12 and 20 pounds of added weight and gentle pressure. Whether you’re working at your desk or curled up on the couch, this can help melt away some of the isolation blues.

As blankets get larger, the way they envelop you becomes more important. The Cushion Lab Calm Embrace Weighted Blanket ($109.97; originally $249) is double stitched to secure the internal glass beads and provide even weight distribution for maximum effectiveness.

Sometimes, you just want the comfort of softness — and the Home Collection Ivory Weighted Blanket ($109.99; originally $129.99) is made from a high-quality mink material that’s incredibly luxurious and warm, even as its therapeutic, anti-anxiety weight kicks in.

Meanwhile, the BlanQuil Quilted Weighted Blanket with Removable Cover ($115; originally $169) tackles one of the biggest blanket problems: slippage. With 77 independent baffles that keep the eco-friendly glass beads distributed evenly across your body, it creates eight connection points to reduce shifting and maintain pressure and comfort.

And at up to 25 pounds, the Gravis Weighted Blanket ($119.99; originally $259.99) also delivers that deep touch pressure to release serotonin and melatonin in the brain to help you relax and mentally unwind faster to promote deeper sleep.

The Yaasa Studios Infinity Blanket ($120; originally $230) isn’t abnormally weighted at all, but it does employ Celliant fiber technology to recycle the body’s natural heat energy into infrared light emitted back into your tissues, increasing blood flow, energy, strength and endurance.

And the Big Blanket ($119.99; originally $500) isn’t extra weighted either...well, as much as any blanket four times the size of average throws doesn’t carry extra weight. At 8 feet square, this Kickstarter darling can keep the entire family all bundled up on the couch all at once.

The Corala Premium Weighted Blanket and 2 Covers ($129.99; originally $254) takes your entire blanket game up a notch. In addition to a smaller than average diamond square pattern to enhance the blanket’s weight distribution, this also comes with a pair of gray duvets and an attractive box for either gifting or storage.

With the BlanQuil Chill Cooling Weighted Blanket with Removable Cover ($199; originally $299), you not only get deep touch therapy, but the BlanQuil Chill uses fabric designed to disperse body heat and whisk away moisture for a cooler sleeping or relaxing experience.

And if you need the Cadillac of weighted technology, look no further than the Eight Sleep Gravity 15 lb. Weighted Blanket ($300). It’s a limited edition design with all the relaxation benefits, a micro-fiber cooling duvet to stay cool and an extra spacious 72” x 48” size that works for both couch relaxing or deep bedtime slumber.