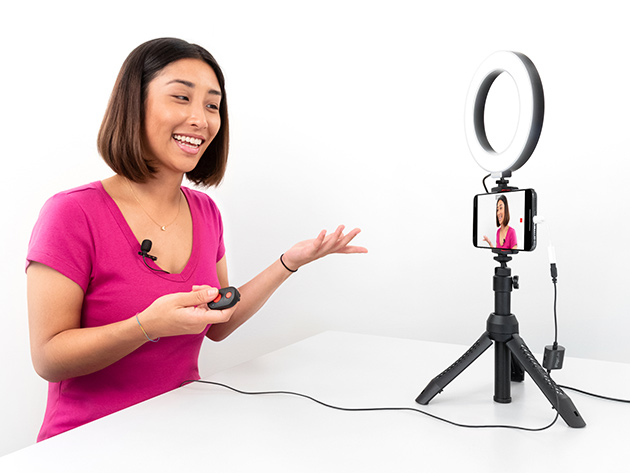 If you’ve ever tried to shoot your own videos, you know the equipment costs to do it right can mount up quickly.

Even if you’re fine with capturing video on your trusty smartphone, you still need a mount to keep your phone in place. And you’ll need a mic to augment your smartphone’s not so fantastic audio capturing. And without proper lighting, your subject isn’t going to look great and your video will never stand up to many of the nearly expert-level home video productions now dominating YouTube and social media.

To answer the call, the iRig Video Creator Tool Bundle was assembled to tackle all of those problems, a handy three-piece combination that will instantly elevate your phone video.

The centerpiece is the iKlip Grip Pro, a multi-function iPhone and camera stand that can tackle virtually any shooting situation. Clamp in your iPhone or Android model phone and you can configure the Grip Pro to fit your needs. From shooting a stable video from a flat surface with the secure tabletop tripod mode, stabilize a handheld shot in the monopod mode, or use the integrated 2-foot telescopic extender pole to serve as a selfie stick, the iKlip has you covered.

It also comes with a standard UNC ¼-inch universal mount to lock in small digital cameras and action video cameras like GoPros.

Meanwhile, the iRig Mic Lav is an ultra-affordable and compact professional-quality mobile lavalier microphone that plugs right into the phone to record great sounding audio anytime and anywhere.

From a YouTube video to Facebook Live streaming to an Instagram story to basic video conferencing, this collection gives you all the technical support you need to produce a smartphone video that can stand toe-to-toe with efforts coming from a full production studio.

The complete collection is available right now for $10 off the regular price, just $89.99.