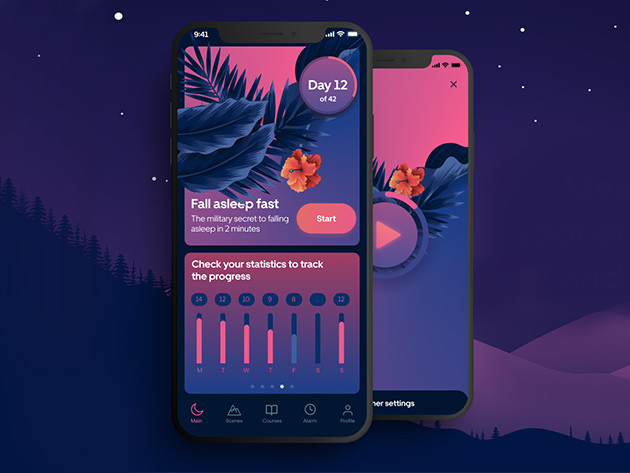 If your sleep has been somewhat troubled recently, you’ve got plenty of company. With so much uncertainty, millions of people everywhere are laying in their beds, wrestling with huge life problems while unsuccessfully trying to also get eight hours of rest...or six...or heck, even 30 minutes.

If that hits a little close to home, you may want to look into the app that developers say can actually put people to sleep in only two minutes. That’s a bold claim, but the folks behind the Restly Sleep app have some serious pedigree on their side to back those claims up.

In fact, this Product Hunt #1 Product of the Day honoree is scientifically based on secret military tactics endorsed by the U.S. Army and field-tested by American pilots.

The app combines male and female voices with different calming sounds that serve as a soothing background soundtrack to help put you to sleep faster. The process is aimed at relaxing both your body and mind and can be customized to help find the relaxation option that works best for you. The sleep timer even dutifully shuts the sounds down when the cycle is finished..of course, it’s well after the two-minute window, so you should be fast asleep by then.

Restly also comes with a smart alarm clock feature that calculates when you should go to bed and wake up based on your sleep cycle. By following those guidelines, Restly says you stand the best chance of waking up refreshed and energetic every morning.

While Restly is lulling you to sleep every night, it is also tracking your sleep improvement, showing you concrete evidence of how well the new procedure is working to help smooth out your sleep cycle.

Who knew the U.S. Army could work such wonders tucking you in each night, but in our current state, any outlet that can offer you a few extra restful hours each night is a godsend.