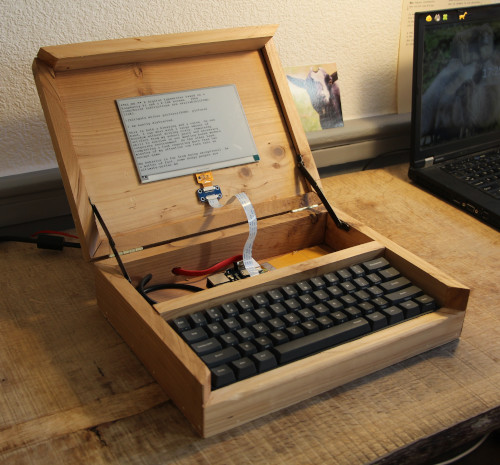 The Ultimate Writer is a hardware and software plan to make your own digital typewriter with an e-ink display. All you need are a keyboard, a Raspberry Pi, an e-ink display, wood and words. The plans are open-source on Github.

Ultimate writer is an attempt to create the perfect digital writing device; it may also be a clickbaity name, who knows.

It was built upon the following principles:

Easily readable e-ink screen. You can read it effortlessly even in sunlight.
Long lasting battery life. You can have a 3 days writing retreat (~20 hours) without recharging it.
Easily serviceable design. Your typewriter is 40 years old and works just fine. You don't want to change your writing device every 5 years. You want to be able to easily change the computer parts easily; and who knows, use something else than a raspberry pi.
Standard OS. You want to use your favorite console-based text editor. You also want a shell access to tweak your setup without reprogramming the device.
Nice full-size mechanical keyboard.

Some good tips in the Hacker News thread, where it is also noted that the parts to make this are about a third of the price of a Freewrite [Amazon], a more polished but functionally similar device.