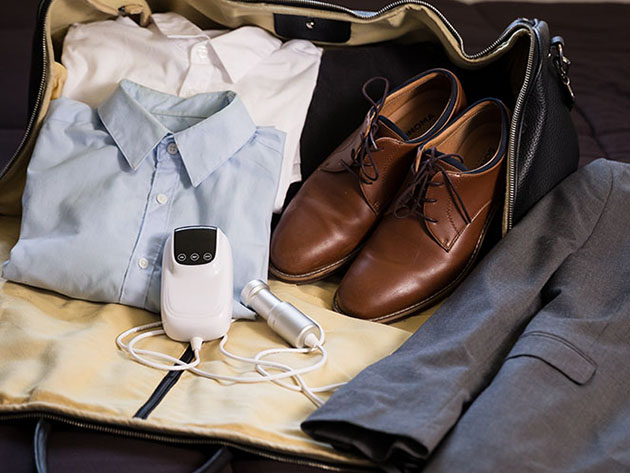 Whether you’re trudging clothes to a laundromat or running huge loads in your own house, washing clothes is always a production. And it’s almost even worse if you don’t have a whole lot of dirty clothes that need cleaning.

Washing one shirt, a dress or a pair of pants with a stain requires 15 to 30 gallons of water for a single load, not to mention the energy cost of powering through an entire wash cycle. And if you happen to be on the road and need to get some clothes washed, the hotel could charge upwards of $70 for a medium-sized load.

Forced to contend with those unappealing choices, you may want to take a hard look into the practical new ultrasonic washers like the handy little Sonic Soak.

Weighing less than 4 ounces and less than 5 inches long, the Sonic Soak actually looks like one of Dr. McCoy’s old medical scanners on Star Trek. But actually, it’s attached to a control unit that generates 50,000 ultrasonic vibrations per second. Just put your clothes in a sink or bowl, fill it with water, then drop the Sonic Soak in and fire it up.

The ultrasonic waves produce microscopic bubbles that implode and vacuum out stains, dirt, bacteria and pretty much anything else your fabric picked up, leaving clean clothes while using 40 times less water and 15 times less energy than standard washing machines. It’s especially great for delicate apparel that you don’t want to subject to the rigors of a full wash cycle.

But unlike washing machines, the Sonic Soak doesn’t just stick to clothes. In fact, this high-quality medical-grade stainless steel marvel can be used to get practically anything clean, from jewelry and personal care items to foods like vegetables.

Whether you take it on business treks, camping trips or just use it around the house, the Sonic Soak’s versatility could easily make it a regular part of your cleaning regimen.

Regularly $250, the Sonic Soak Ultrasonic Cleaner was already marked down to $135.99 before an additional $15 price drop, bringing your final total down to only $119.99.