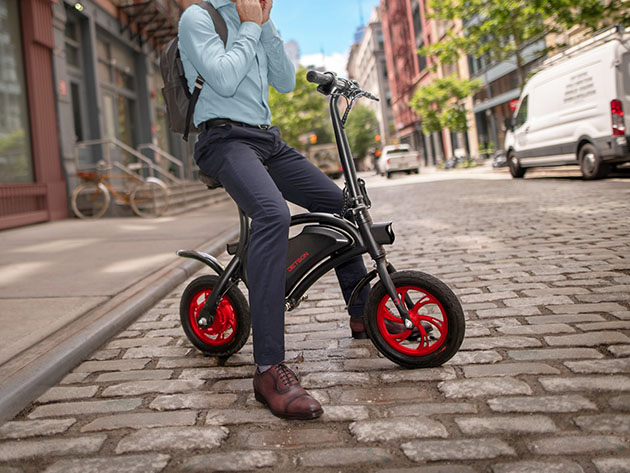 Even once stay-at-home orders are lifted, it’s likely many of us will be sticking closer to home, at least for a while. And rather than taking the car out of the garage for a 10-minute-or-less drive to the grocery store or the pharmacy, don’t be shocked if you start seeing a lot more short jaunt scooters and electric bikes start springing up around a community near you.

The trend toward ecologically responsible, quick hop transportation has been building well before coronavirus. That move figures only to expand as many city dwellers start looking for an alternative to the cramped quarters of most public transit.

The Jetson Bolt Compact Electric Bike ($399.99; originally $499.99) can get you out ahead of the curve now. A compact electric scooter with a powerful 250-watt hub motor and a rechargeable lithium-ion battery, the Bolt can zip you along at about 15 mph for a range of up to 15 miles. If it normally takes about half an hour to walk down to the supermarket, the Bolt can put you at their front door in a breezy 8 minutes or so.

The Bolt sports a twist throttle, an LED headlight for evening travel and front and rear disc brakes on the 12-inch tires. In addition to cutting your carbon footprint down to nil, the Bolt also folds conveniently with a collapsible handlebar to move and store easily once you reach your destination. It’s even got a built-in carrying handle to just scoop up your 34-pound baby and tote it into a garage, closet or wherever as you carry out your business.

For a little extra oomph, you can also try the Jetson Metro Folding Electric Bike ($799.99). A little more bike than scooter, the Metro has three different pedal assist modes so you can do most of the actual pumping yourself or ratchet it all the way up to let the Metro do all the work. With a range of up to 25 miles and a charge time of only 4 hours, this model can get you almost anywhere you need to be, with all the same foldability and easy storage and transport of the Bolt.

The folks at Wired called the Metro “great looking” and “affordable” — and with the Metro’s LCD display clocking your speed, distance, battery life and more, you may come up with some added adjectives of your own.