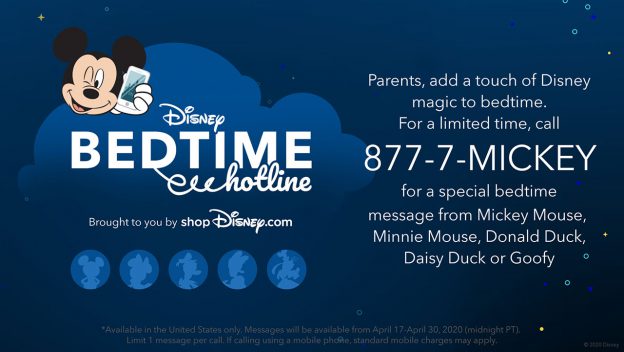 Earlier today, Disney announced they are offering a free bedtime message, via a toll-free number, to help children to go to sleep. But I called it, and it's clear to me this was not created specifically for this shelter-in-place time. I started by listening to option 5, aka "Goofy." He talks about being tired from going fishing and having lunch with his pal Mickey. Then I rang "Daisy Duck." She had a picnic with Donald, and later hung out and played soccer with her nieces. And if you think she might be in the same germ pod with those members of her family, think again. She then brags about having dinner with Minnie Mouse! I guess characters in the Disney universe aren't affected by coronavirus? Seems a bit tone deaf, Disney! In any event, here's the info, so you can remind your little ones of all the fun they're missing:

Beginning today, fans can hear messages from favorite Disney characters before falling asleep – all from the comfort of home. Parents, simply call 1-877-7-MICKEY for one of five special messages for your little ones from Mickey Mouse, Minnie Mouse, Donald Duck, Daisy Duck or Goofy.

The toll-free hotline will run for a limited time only, so be sure to make your call before the end of the month, Thursday, April 30 at midnight PT. Available in the United States only. Limit 1 message per call. If calling using a mobile phone, standard mobile charges may apply.