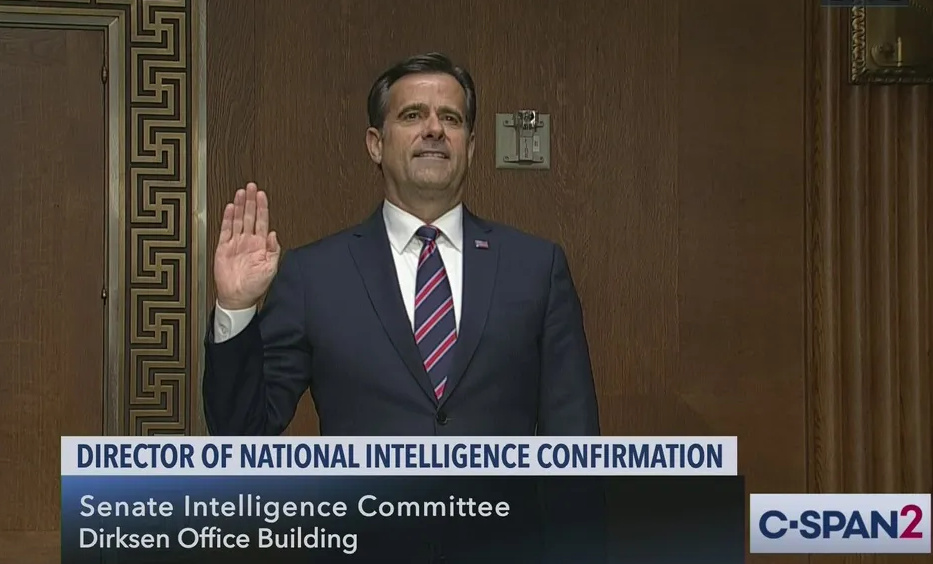 The Republican-dominated Senate today confirmed Texas GOP Rep. John Ratcliffe as the new director of national intelligence (DNI). He becomes the fourth person to hold the job for Trump in less than one year.

The vote was 49-to-44, along party lines. Ratcliffe received more votes in opposition than any DNI in the entire 15-year history of the office.

Ratcliffe's verified Twitter account follows a number of right-wing fringe accounts, including 9/11 Truthers, and a handful promoting a QAnon conspiracy theory the FBI has labeled as terrorism. This should be disqualifying, but nothing matters.

What are Ratcliffe's qualifications? Well, the willingness to do whatever the impeached and manifestly unfit president tells him to.

“Blind loyalty,” as Reuters quotes a source as describing it:

Ratcliffe is known as one of Trump’s most loyal and vocal supporters in Congress. He was a major defender of the Republican president throughout last year’s impeachment proceedings. He also lashed out at former special counsel Robert Mueller, who had investigated Trump, when Mueller testified in the House in July.

According to media reports, Trump initially picked Ratcliffe to be DNI because he had liked his aggressive questioning of Mueller during that hearing.

Senate Democratic Leader Chuck Schumer said last summer Ratcliffe had been selected because he had shown “blind loyalty” to Trump.

Ratcliffe is deeply unfit to be DNI. He has little experience, has trafficked in conspiracy theories, & is poisonously partisan in a job that requires objective professionalism to make sure executive branch & Congress have solid evidence to make decisions. https://t.co/UlxOi2vZcm

Ratcliffe is just as unqualified and insidious as Grenell, but it is possible he’ll be less competent at being insidious. https://t.co/6SyEqbMQ0A

Every Senate Democrat voted against confirming Ratcliffe as DNI but agreed to dispense with the rules to accelerate the vote so as to get rid of Grenell sooner. @julianbarnes ⁦@npfandos⁩ https://t.co/jC2QCulR3U

It’s a sad day when a leader for national intelligence can’t even get 50 votes in the U S Senate. Unbelievable. Trump era. Smh.

The Senate has voted 49-to-44 to confirm Rep. John Ratcliffe as the next director of national intelligence. He received more votes in opposition than any DNI in the 15-year history of the office. https://t.co/W2qwkcd6SN

Ratcliffe appears to take quite an interest in some of the internet's most outlandish conspiracy theories. Not exactly what you'd expect from a candidate to oversee the nation's intelligence agencies. https://t.co/wxz2ird0w1

Sophia Thomas, the head of the Natl. Assoc. of Nurse Practitioners: ‘PPE has been sporadic, but it’s been manageable’ Donald Trump, a president: ‘Sporadic for you, but not sporadic for a lot of other people.’