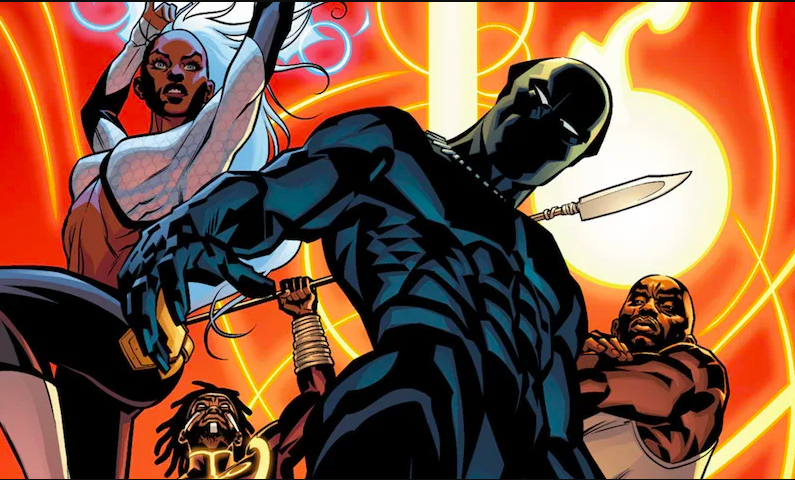 So to tide myself over, I decided to check out Coates's brief run on Black Panther and the Crew with illustrator Butch Guice. A nod to or revival of Christopher Priest's similarly Panther-inspired 2003 series, The Crew, the comic brings T'Challa to Harlem, in a loose team-up with some other Harlem-affiliated superheroes, including Luke Cage, Misty Knight, and Storm from the X-Men. It's an intergenerational story about Black liberation and revolution, that begins with the death of an elderly Black activist in police custody during a series of ongoing protests against racist police brutality. The conspiracy at the heart of the murder mystery organically weaves in gentrification, astroturfed agitators undermining protests, and algorithmic policing that's never as unbiased as it claims.

Once again, these are big ideas, befitting of Coates's work in both fiction and nonfiction. But Black Panther and the Crew makes this topical story resonate on a powerfully personal level by grounding all of these plot points in character. The personal stakes — which I had found missing in his earlier comics work, in favor of more philosophical treatises — drive the story, and help the reader understand how good intentions for liberation can lead to horrible things. The result is a beautiful and exciting comic book that asks difficult questions about what it means to tackle an empire using the same tools and methods that that empire has used to oppress people.

Of course, questions are easy; answers are more difficult to find. And Coates embraces that as well, as best as he can. My only real complaint has to do with the ending, but I can't blame that on Coates or Guice; the book was cancelled in May 2017, after just six issues, due to poor sales. Which is a shame, because the story they set up has legs that could have easily carried it through today, and beyond. Still, if you want a high-octane adventure that draws a line from the Black Panthers to Black Panther to the current Black Lives Matter protests, The Crew should satisfy you.

Black Panther and the Crew: We Are The Streets [Ta-Nehisi Coates and Butch Guice / Marvel Comics]