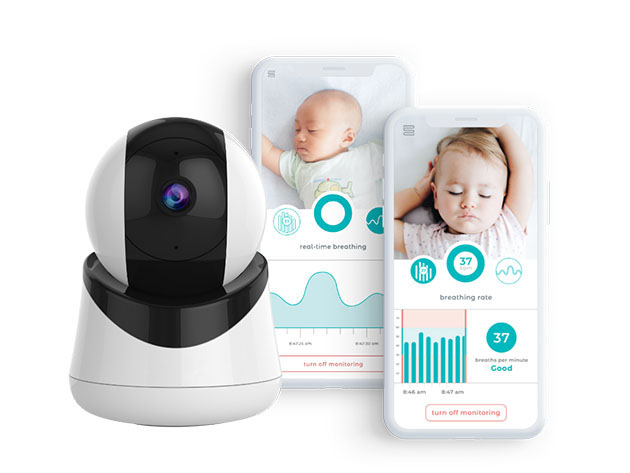 It’s a silent tragedy that no one ever wants to even consider.  But the reality is that Sudden Infant Death Syndrome (SIDS) claims the lives of nearly 3,500 babies in the U.S. every year. It’s a horror no parent wants to face, yet the threat of this heartless killer has newborn parents keeping as close a watch on their infants while they’re sleeping as when they’re awake.

Nate and Sarah Ruben were those anxious parents when their first son was born in 2012. At a higher than normal risk for SIDS, Sarah got up five or six times a night for months to check his breathing, causing a lack of sleep that ultimately triggered severe postpartum depression.

Following those troubling days, Nate created the Smart Beat Video Breathing Monitor as a way to offer parents peace of mind whenever their child sleeps.

The system itself is incredibly simple — just sync the camera to the Smart Beat app, point it at your sleeping baby...and you’re done.

How the system works, however, is decidedly less simple. In fact, Smart Beat is so sophisticated that it’s proprietary algorithm is actually analyzing the Smart Beat's video feed and measuring a baby's vitals, all without any wearables.

The camera can spot 16 million color shades and looks for shifts in any of its 2 million pixels 20 times per second. That analysis can tell if there’s movement from the baby and whether that movement is breathing. That data can detect any clinical apnea or any above or below average breathing rates, literally chronicling and studying a baby’s every single breath.

The camera’s HD video stream can be fed right to any smartphone or tablet, along with an instantaneous alert should Smart Beat spot any abnormalities as the child sleeps.

The Smart Beat also includes two-way audio so you can listen in or even offer a baby reassurance without even going into the room. It even has a lockdown feature to take the video feed off the grid and make it unhackable for anyone outside your home.

Right now, you can save $15 off the price of the Smart Beat Video Breathing Monitor and get one for just $284.