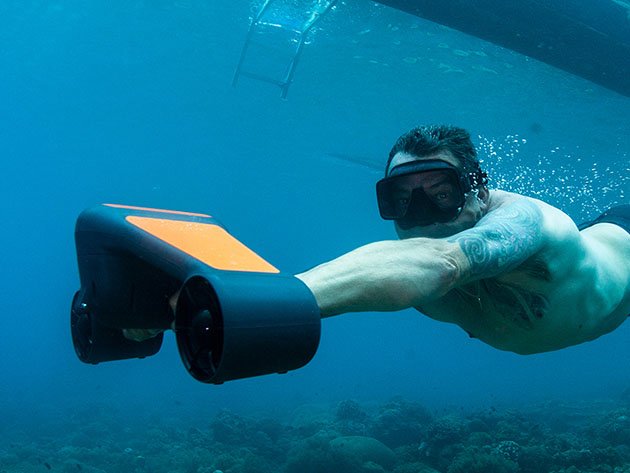 After being stuck in the house for months, you’ve got to be thinking about planning at least one summer adventure somewhere. If that plan calls for some aquatic activities, this could be a good time to try out one of the hottest and most entertaining pieces of watersports tech around, the underwater scooter.

When you go under the waves, just grab hold of the handles and the scooter will zip you through the water, cutting down all the time and serious exertion it takes to make a long swim.

Over the past few years, Geneinno has become one of the premier names in the aqua-scooter game, powered by their Trident model ($549.99; originally $699.99). Fire up the Trident’s mighty dual propellers and this scooter has a pair of speed modes that’ll have you cutting through the water at over 4 mph, which is essentially just a touch faster than a world-class swimmer. At home in freshwater, seawater, or even in a pool, the Trident can dive up to 160 feet down and runs for up to 45 minutes on its removable, rechargeable battery. It’s even got GoPro and light mounts to capture amazing underwater footage.

If you don’t need to move quite that fast, the Geneinno S2 ($359.95; originally $399) still humps up to an impressive 2.7 mph maximum speed from its deceptively small size. With up to 60 minutes of running time, it’s got enough juice to help improve any snorkeling, diving, or swimming outing. And in case you want to keep a close eye on the training of any young swimmers, the S2 has an app control feature that lets you change and record speed, depth, distance, and battery life, all from your phone.

Or if you’re eyeing the best value, you can right now save $200 off the retail price of the Sublue Whiteshark Mix ($499; originally $699.99).  The streamlined and simplified user-friendly design makes the Mix a perfect choice for swimmers of all levels.  The twin motors produce 17.6 lbs of thrust, enough to propel the Mix up to 3.4 mph to depths of 130 feet. And at just over 7.5 pounds, the Mix is super lightweight and easily fits in the included carry bag for easy transportation and storage.