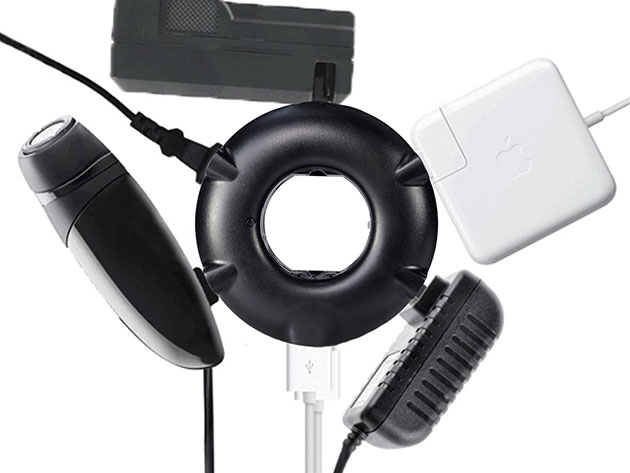 What's your biggest gripe about power strips? Since most power servers like that are pretty standard these days, your beef probably isn't about performance or connectivity. No, the biggest rap on trying to use many power strips is the curious engineering decision that often leaves multiple oddly shaped plugs and charging units unable to all plug into a power strip at once. Before you know it, bulky plugs are blocking half of your outlets and you need…another power strip!

The design wizards at Mogics noodled over that particular problem and came up with an answer: the world's first and only travel power strip that fits in your pocket. With the Mogics Power Bagel Travel Power Strip, you can fill up to five sockets with all manner of international plugs as well as 2 USB ports, all comfortably and without any awkward angling or blocked outlets.

The idea is so incredibly simple that it's clear why it struck a chord with Kickstarter patrons, who funded the Power Bagel to the tune of over $140,000.

The Power Bagel lives up to its billing, a round, donut-shaped device with five adaptable sockets to handle UK, EU, AU, and US-style plugs. Even with a full boat of connected devices, not to mention the pair of fast-charging USB ports, all plugs sit easily and deliver power evenly to all sources.

Mogics even thought of a rolling mechanism on the 3-foot adjustable cord with auto-lock stoppers so everything stays neat and tidy. And it certainly doesn't get tidier than a power hub you can literally drop in your pocket and take with you on virtually any international adventure.

Rather than loading up with different adapters and chargers to handle all of your devices or to use in any particular country, the Power Bagel attempts to be all things to all power users — and mostly succeeds.

The Mogics Power Bagel Travel Power Strip retails for $49, but with the current offer, you can save over $10 and pick one up for all your summer travel for only $36.95.