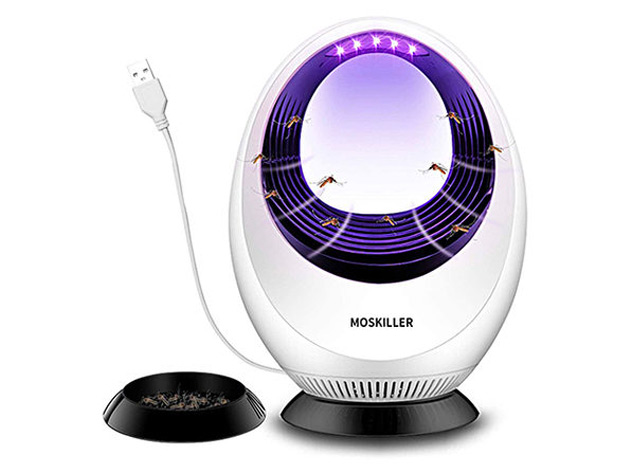 As the summer surges forward, grilling and evenings in the backyard may be the only serious outdoor excursions many of us take this season. Yet even with all of our current problems, there's one group who doesn't care a bit about COVID-19 and will still look to make any trip you make outside into an uncomfortable disaster.

Mosquitoes. You hate 'em. I hate 'em. We all hate 'em. The Centers for Disease Control calls them the world's deadliest animal. And even though there may be some unknown environmental impacts, scientists say a mosquito genocide might not be a horrible thing for the planet.

You can help get that mass extermination started right in your yard with the Kinkoo Moskiller Mosquito Killer Lamp.

Rather than slathering yourself in mosquito repellant, the Moskiller takes an innovative approach to eliminating pesky, disease-carrying mosquitoes without the use of chemicals and other harmful substances.

Rather than depend on just one trick, the Moskiller actually employs four different technologies to thin out your backyard mosquito horde. The unit emits 360-degree wrap-around UV light waves and bionic temperatures that attract mosquitos from a wide range of over 200 square feet.

Once they get close, a seven-leaf fan creates a strong peripheral vortex airflow that essentially sucks its prey right into the Moskiller's anti-escape storage box. There, a physical air-drying method puts the final zap on mosquitoes, dehydrating them and killing 'em dead.

Meanwhile, the Moskiller handles its responsibilities in virtual silence, so you can also keep it running while you work or sleep.

The lamp has a universal USB port so to do its mosquito-killing duties, the Moskiller can also be plugged into an adapter, a power bank, or even a computer or other device.

You can do your part to end the scourge of mosquitoes once and for all by picking up a Moskiller Mosquito Killer Lamp now at 25 percent off its regular price, down to only $29.95.