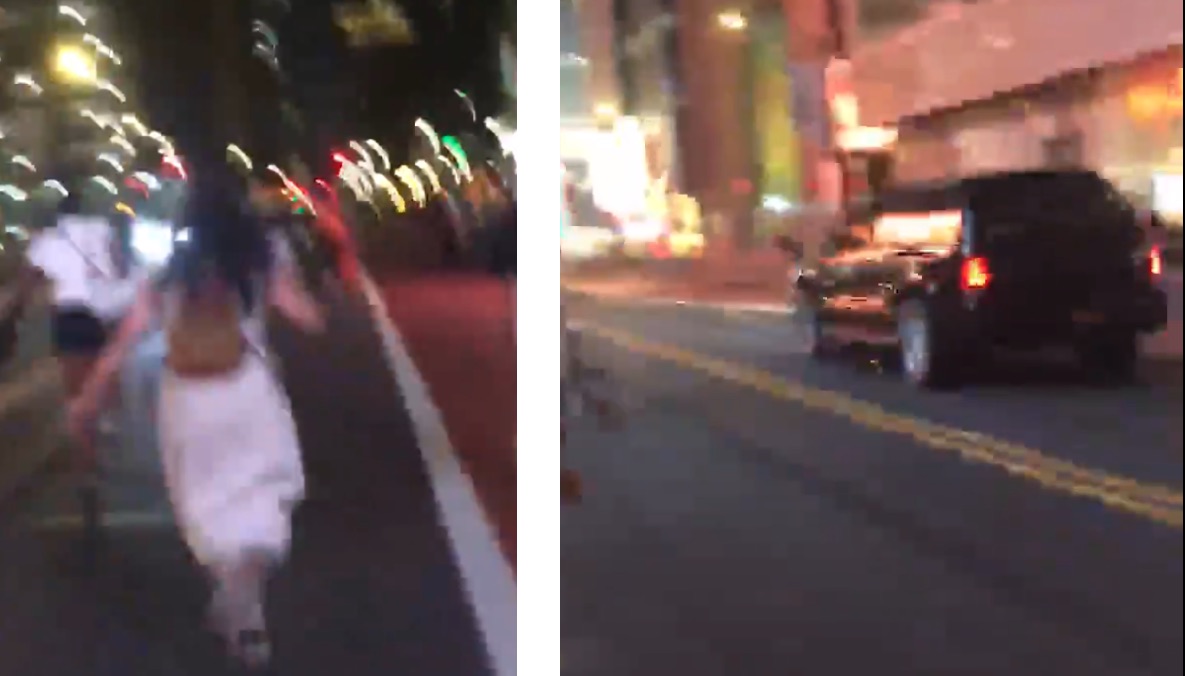 #BreakingNews an SUV just plowed through protesters on 42nd street in #manhattan Still assessing injuries if any. More on ⁦@NY1⁩ #blacklivesmatter #nycprotest more on ⁦@NY1⁩ pic.twitter.com/RMs1tsc2zT

Another eyewitness account from NYC Times Square - allegedly showing a uniformed city worker on the passenger side of the SUV that plowed over bicyclists. @CBS46 https://t.co/Vm2jnbWN0i

The tactic was used in Charlottesville, and resulted in the death of a protester. SUVs driving into Black Lives Matter protesters is a thing that has been happening in mid-2020 throughout the United States. This is a domestic terrorism meme of sorts, and copycats seem to be copying one another.

While we don’t know who was driving this SUV, we do know there’s a clear pattern of extremist vehicle attacks targeting BLM protesters.

As I told @NPR the other week, this is increasingly a deliberate tactic (as we saw in Charlottesville, Richmond, etc): https://t.co/ajiRh9LVS6

It happened in Bloomington, Indiana, this week, at an anti-racism protest.

This is 29-year-old Chaz Mottinger. She is seen on the hood of the red SUV that drove through a crowd of protesters last night in Bloomington. She is now at home recovering after being knocked unconscious and taken to the hospital. @WISH_TV pic.twitter.com/NOJ2mgxsm9

Police still have not identified the attacker who drove an SUV through a group of protesters there on Monday, after the July 4th holiday weekend, knocking one young woman unconscious.

Here’s a closer look at the two people that were inside of the red SUV that drove through a group of protesters yesterday in Bloomington. If you recognize either of these people you were encouraged to reach out to Bloomington police. @WISH_TV pic.twitter.com/LpmJUxPwx3

Police arrested a man in Long Island, NY for driving his SUV into two Black Lives Matters protesters there on Monday night.

Anthony Cambareri, 36, is accused of using his vehicle as a weapon and driving into the activists with his Toyota RAV4 at about 6:45 p.m. on Broadway in Huntington Station, Long Island, said police.

Provo Police are searching for a man who shot the driver who ran a SUV through a crowd of protesters on Monday night. https://t.co/YOBT5KwRCy

Video shows an SUV pushing protesters as it moves forward. The driver was shot, wound not life-threatening. Police say the shooter was caught on camera but was "thoroughly masked." It's not clear if the shooter was protesting with one group or the other. https://t.co/gN7jjR2ZFs

One group said it will gather Wednesday in support of of the man and the woman who have been arrested, arguing the SUV driver struck protesters with his vehicle and should be charged.https://t.co/4CBt1sZ0Gg

The Iowa State Patrol confirmed that the SUV hit the protester, who was among about two dozen Black Lives Matter protestershttps://t.co/3hAX3bYp2A

Cops did it in Detroit.

Mishawaka police are continuing their investigation into an SUV driving into a group of protesters Saturday night, an incident that sent 23-year-old Trevor Davis to the hospital.https://t.co/XpWUqifhs3