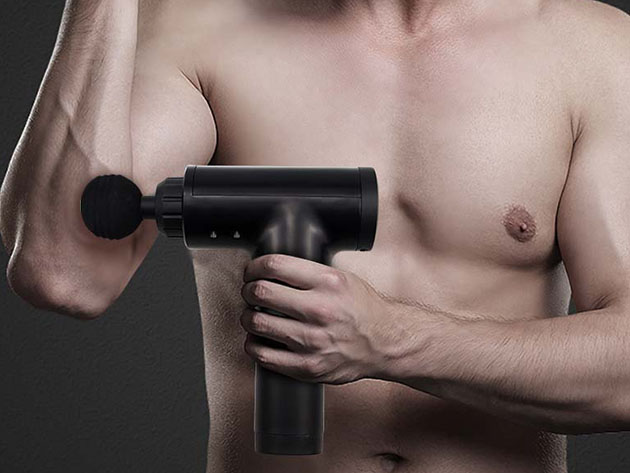 Unless you're doing a lot better than most of us these days, having a personal masseuse on call isn't really financially doable. And of course, how many masseurs are still doing house calls or accepting visitors during all this time of medical uncertainty?

With skilled human hands mostly out of play right now, it falls to mechanical help in your own hands to handle bringing soothing relief to aching, tired muscles and joints. Since they debuted 10 to 15 years ago, massage guns pounding deep tissue pain into submission have become almost standard issue equipment to quell inflammation.

But unless you're one of those Rockefellers we talked about earlier, you probably aren't ponying up for the Cadillac of massage guns, the $700 Theragun.

Not to worry. We found deals on 10 massage guns that will help quiet aching body parts — and won't even cost you half of the Theragun's price.

If you need a post-workout recovery, this handheld unit should be able to help, digging deep into strained muscles to find deep relaxation. With five replaceable heads to target specific body areas, this gun is also cordless with up to three hours of battery life on a single charge.

With six intensity levels to adjust massage pressure, this unit with an ultra-quiet motor is ready to attack different muscle groups with just the right amount of power and pressure. And at $120 off its regular price, the Aduro is one of the best deals available now.

Massage therapy, welcome artificial intelligence into the mix. With the Actigun, its sensors intelligently react to the condition of your muscles, then calibrates to deliver the exact percussive strength your body needs — and can take — in the moment. And with percussion rates of 1800 to 4200 per minute, there's bound to be a level that's just right for your specific relaxation needs.

Meanwhile, the Actigun 2.0 ratchets up to 20 variable speeds, all dictated by that oh-so-smart AI. With four changeable heads and a battery life of over four hours, this model would already be a winner…even if it wasn't the biggest discount in this list at nearly $130 off, an almost 60 percent savings.

Sure, the Backmate can do a killer job breaking up tight, strained back muscles, but the percussive vibrations are actually a godsend for any aching body part. This gun addresses trigger points to alleviate knots while also correcting imbalances that can lead to pain and skeletal alignment issues too.

Sure, muscles always need work after heavy activity…but what about during your warm-up? The Prosage Thermo combines percussion and Theralite heating to release tension and pain, activate muscles and set an athlete up for recovery before they even make their first move. With three intensity levels and five different massage heads, it's more than up to the pre-game or post-game challenge.

Speaking of athletes, the DEEP4s has them firmly in mind, with percussive strokes that actually penetrate almost half an inch below the skin's surface. In addition to its full-body access, the DEEP4s' design is about functionality too, with a three-angle adjustable arm outfitted for multiple holding positions so no matter where it hurts, the DEEP4s will reach.

The Muscle Blaster shifts frequencies, amplitudes and torque to vary up its massaging goodness, all aimed at increasing blood flow, releasing stored lactic acid, and relieving sore muscles. It also features noise reduction technology to make sure you get muscle relief from a piece of equipment that doesn't sound like a buzzsaw.

Of course, the ELEEELS massager has a sports mode, but look a little closer and you'll also find a comfort mode. It's designed especially to help alleviate some more everyday muscle soreness and neck, back and leg stiffness that can come from sitting too long at a desk, repetitive stress from digital devices and even long walks in high heels. BestMassageTech also touts the ELEEELS for being "one of the quietest massage guns on the market."

After 20 years in the pain relief game, Power Plate is one of the leaders — and the Pulse is no exception. With six head attachment for targeted massage using four different vibration levels, this powerful, yet whisper-quiet massager digs into tired muscles, promotes blood flow and fascia release, the connective tissue around muscle groups that can help them once again feel malleable and elastic.