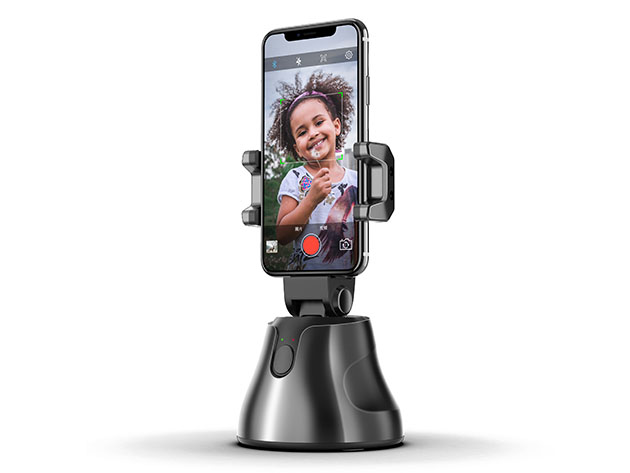 The bar has been raised on home video production. So just in case you haven’t been on YouTube, Instagram, TikTok or other video-heavy platforms lately, the days of the boring, white-walled, locked-down selfie video that looks like it could have been filmed by hostage-takers doesn’t really cut it anymore.

Thankfully, your filming options have also advanced beyond propping your smartphone up against a wall and pushing record. In fact, the Apai Genie Gimbal is an easy-to-use, smartphone gimbal that practically mimics having an actual photographer on hand to direct your photo or video shoots.

Just clamp your phone into the Apai Genie’s loving embrace, and you’re ready to go. Powered by artificial intelligence, you’ll find this gimbal not only does a monster job steadying and smoothing out all your videos, but its machine-driving smarts allow the unit to automatically lock on to your face and track you, even when you move out of frame. That’s why this gimbal has full 360-degree rotation capabilities...so you can even do circles around the Apai Genie and like a good photog, it’ll keep the lens trained on the action.

It even has a pairs mode, so two people can both stay in the frame together without any unfortunate cropping incidents.

In its intelligent shooting mode, the Apai Genie can be set to detect your face and immediately start shooting. You’ll never have to ask for help shooting a selfie again.

Meanwhile, your robot cameraman can flash some serious skills, switching easily between horizontal and vertical recording modes, offering multiple perspectives to record and a full range to adapt to different scenes.