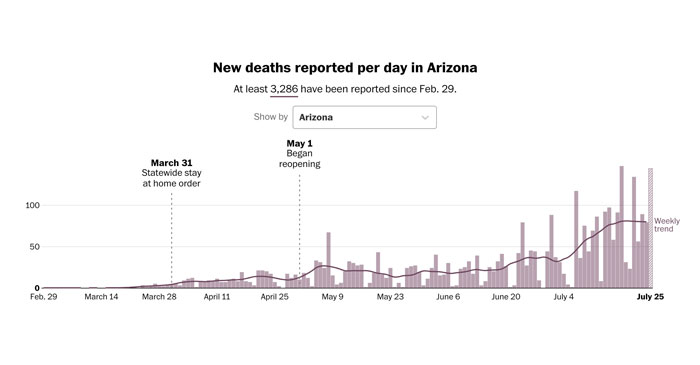 Yesterday, The New York Times ran an article about how the GOP governor of Arizona's limited response to the pandemic resulted in a "leveling off" of Covid-19 deaths and cases:

As the United States surpasses four million known coronavirus cases, far more than any other country, new outbreaks are sending thousands of seriously ill people to hospitals and driving a new wave of funerals. But there are also initial signs that new infections may be leveling off in some places, including in some of the worst hot spots.

That may be most visible in Arizona.

Only a few weeks ago, Arizona was leading the nation in coronavirus infections per capita, as the virus spread across many Sun Belt states that had opened quickly in late spring. Facing a mounting crisis in June, Gov. Doug Ducey, a Republican, reversed himself and allowed cities and counties to order residents to wear masks. He also rolled back some earlier reopenings, and directed bars, indoor gyms, water parks and movie theaters to shut down again.

About a month later, the number of patients hospitalized with the virus is starting to decline. As of Friday afternoon, Arizona was the only state where known new daily cases were decreasing, a milestone that reflected, in part, just how dire conditions had been.

But today new cases and deaths in Arizona increased sharply, as you can see by the chart above (from The Washington Post). 3,740 new cases and 144 new deaths (more than any other state including Florida) have been reported today.