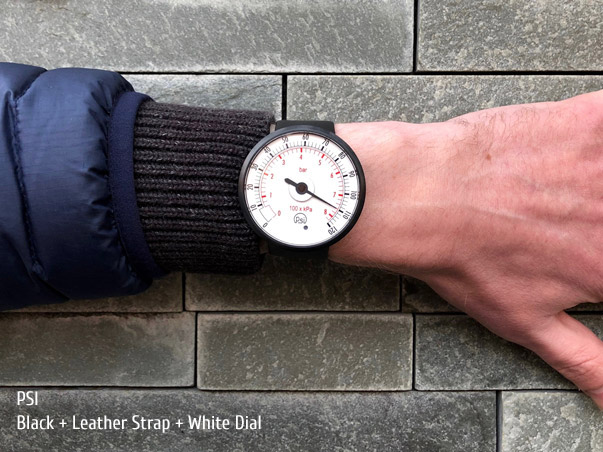 For many years, we've celebrated Tokyoflash's glorious and impractical contributions to horology: the company has set itself on a long path to imagine what a watch can be in an era where we all have unbelievably precise, self-setting timepieces in our pockets at all times, playfully experimenting with what a watchface can do while still telling the time (nominally, at least!). Read the rest

Brought to you by Automatic, an auto accessory that talks to your car’s onboard computer and uses your smartphone’s GPS and data plan to upgrade your car's capabilities. Special offer for Gadgets listeners: $(removed) with free shipping!
Cory Doctorow / 1:00 pm Tue, Jun 3, 2014

LED watch with a wooden face and bracelet

Tokyoflash's Kisai Night Vision Wood LED Watch builds on their earlier work with beautiful, carved-wood bracelets, adding a wooden face backed with powerful LEDs whose glow can be seen through the smooth vegetable matter. It's a very futuristic look indeed. The watch charges with USB, and comes in sandal or maple, and it has a preprogrammed LED dance it does twice a day as a little show-offy gesture. They're $150 each.

TokyoFlash's new Kisai Console Wood watch has a gorgeous sandalwood bracelet and a groovy LED-lit display that nestles directly in the sweet-spot between functional and ornamental. It comes with your choice of blue or green LEDs and red or dark sandalwood, and charges over USB. I'm partial (very, very partial) to the dark wood. Wow. Read the rest

Tokyoflash's latest Kisai watch is the Kisai Stencil, based on a concept design submitted by a math teacher named Heather Sable. It uses "negative space" to draw the numbers, a display that is cryptic at first but is easy to read at a glance once you've figured out the knack of it.

I found that I had a knack for creating read-at-a-glance designs with cryptic looking, yet easy to read digits. I designed the digits for this concept by starting with rectangular shapes, and cutting out unnecessary pieces using line segments and dots. By arranging them into four quadrants with some connecting lines, the display appears to be just a bunch of stencilled in lines and dots, while if you read the background, you can see the digits clearly.

When I got an email from Tokyoflash telling me they were interested in this design, I was absolutely elated. I had a huge smile on my face for the entire day. Now that I see how my concept has been brought to reality as Kisai Stencil, I am super-excited. The fact that Tokyoflash decided to emboss the digits I created on the strap fits so perfectly with the fact that I am a Math Teacher - of course there are numbers on my watch strap!

TokyoFlash's new Kisai On Air watch uses an always-on touchscreen LCD to display the time; the "minute hand" points to the hour and displays the minutes. The watch has a bunch of fun animations and some limited customizability, too.

A multi-functional watch design, Kisai On Air features touch screen technology and displays the time and date. It also has an alarm mode and animation.

The touch screen display has four hot-zones (top, bottom, left, right) which you can simply touch with your finger to change mode; time, date, alarm, light up.

After 15 seconds the screen will lock to prevent accidental input, however the LED light up function can always be operated. To unlock the display, simply swipe your finger across the screen from left to right. Please see the video at the bottom of the page to see this in action.

TokyoFlash's new 3D Unlimited watch is a mirror-backed LCD watch with an EL backlight that displays time as faces on a cube. I'm inordinately fond of this kind of slightly impractical time-display, a kind of unapologetic use of time as ornament in a world where we all have network-synched clocks in our pockets.

Made of high quality polished stainless steel, Kisai 3D Unlimited has an adjustable strap making it suitable for small and large wrists. It is also a light watch design and at only 8.5mm is one of the thinnest designs available from Tokyoflash Japan. The watch uses a standard CR2016 watch battery which will last at least 12 months and can be replaced easily.

This concept design for a Cheshire Cat pocket watch tells the time by the disappearing bits of the mad kitty.

The hours are affixed around the outside of the case in normal clockwise fashion. The cat himself is segmented into 5 minute intervals, the grin, appearing first, is 5 minutes, his head is the 10 minute mark, and each stripe is five minutes. The singular minutes are four dots affixed just below and between the 12 and 1 hour markers.

(Thanks, Paul!) Read the rest

The latest gloriously impractical Kisai watch from TokyoFlash is the Traffic, a watch that displays the time as an animated traffic map -- the $170 LED-watch recharges with USB.

This Instructable guides you through the process of building a watch that has it all: steampunk case, temperature/range sensing, 16-bit drawing app, breakout, and binary/analog/digital display. Cost of materials runs about $250, and source for the Arduino controller is free.

The TokyoFlash folks have a new crazy-ass watch out, the Broke, which tells time by displaying an animation of a shattered piece of stained glass. The bright screen must be pretty battery-intensive because they've added USB recharging, which is pretty nifty.

We'd like to extend our thanks to those of you who have given generously to charity this year; three of those who did so, and who correctly answered a challenge, were selected by our pals at Tokyoflash to get a gift of their choice from their wonderful catalog of bizarre watches. Watch winner Thomas Smartwood donated to the Salvation Army and the public library in Des Moines; Sean Corbett donated to the Electronic Frontier Foundation, and Chris Haigy donated to the Ali Forney Center in New York. Read the rest

Here's a great chance to brighten up your hours and minutes for 2010 - Tokyoflash is giving BB readers the chance to win the watch of their choice.

To get one, you must do two things.

• First, give a donation to any charity. $50 is a good amount, but give what you can.

• Second, answer the following question: "what's the name of the holiday celebrated in Japan from January 1st?" and email your answer to BB at tokyoflash.com. Three winners will be selected at random on Friday. Read the rest

Now back to your regularly scheduled nifty, blinky things. Like these LED-enhanced false eyelashes designed by artist Soomi Park. They're hooked up to a motion sensor, so as you tilt your head in different directions, they turn on and off.

Thanks to Chris Tackett at Treehugger!

This concept watch Alexandros Stasinopoulos uses three interleaved tapes to tell time. I have no idea if it'd be possible to build this, but man, I want one.

(Thanks, Paul!) Read the rest

ShareBrained Technology, makers of the wild and wooly Chronulator clock kit, have released a new version of their product. Chronulator is an electronics kit that lets you build arbitrarily weird electronic clocks, from TokyoFlash-style digital numbers to whacky analogue ones that use dials, wheels or other readouts to display the time. John Park from Make tested the kit by building this handsom little fella inside a Romeo and Julieta cigar box.

Tokyoflash, purveyors of fine eye-candy for your wrist, has hit another homerun with their latest LED watch, the Kisai Keisan, which uses long convex lenses to diffuse the LEDs underneath, producing a striking effect. And lest you fear that this watch is uncharacteristically simple to read, fear not: "Simply touch the button and digits will appear in four vertical lines. Add the digits in each vertical line to read the time. The date is displayed in the same way after the time. The time and date can be accelerated by pressing button A again."