Rise Again: would you rather be killed by zombies or Blackwater mercs? 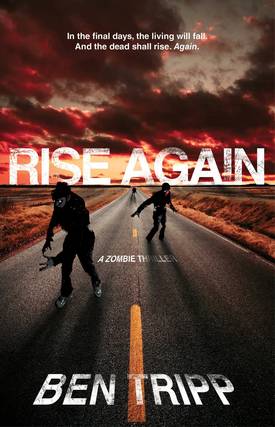 Rise Again: would you rather be killed by zombies or Blackwater mercs?

Ben Tripp's debut novel, Rise Again, is a flawed, but often brilliant zombie story that brings a new twist to the genre. Rise Again's protagonist, Sheriff Danielle "Danny" Adelman, is a small-town cop who struggles with mental and physical scars from serving with the US Army in Iraq.

One day, a large number of people drop dead and then rise again as zombies (your basic zombie story setup). It's July 4, and Danny's little town is packed with tourists who die in great waves. The survivors panic and try to break free, and the ensuing traffic jam turns into a riot. By the time the dead rise and begin to attack the living, the world has basically ended. Danny gathers up a band of survivors and runs for it, heading for the sparsely populated countryside (and, eventually, for a remote fire ranger station with independent generator-powered electricity, an air-traffic tower with a working radio, and water).

So far, so normal. The first two acts of Rise Again suffer from a first novelist's lack of pacing smarts, dragging in places, lingering too long on thin action scenes and character studies. Tripp's characters at least have the good grace to behave as though they've seen zombie movies and act without making the idiotic errors that watching a couple Romero movies should immunize you against. There's nothing actively bad here, but nothing outstanding either.

But then, in the third act, Tripp introduces something novel to the genre, and the story takes a turn for the better -- much, much better. Danny is seeking her missing sister, and her quest takes her away from her survivor friends to San Francisco, where only a small quarter is free from the undead -- a section of downtown ringed by out-of-control fires and hordes of shambling zombies. The survivors are all crammed together and live under martial law, as enforced by private military contractors from "Hawkstone," a thinly veiled analog for Blackwater and the other private military contractors that Danny struggled with in Iraq.

You see, in Tripp's world, the US government has outsourced its emergency preparedness to the same military contractors who turned New Orleans into a profiteer's haven after Katrina, a nightmare world of shoot-to-kill and cost-plus racketeering that traded compassionate aid from the state for roided-out, heavily armed Rambo-wannabes who revel in their petty authoritarian power.

Here's where Rise Again becomes something more than just another zombie story. By putting his characters in jeopardy from both zombies and private, trigger-happy mercenaries, Tripp raises the stakes so high that the book becomes nearly impossible to put down (I stayed up long past bedtime finishing it, and nearly jumped out of my skin when a floorboard creaked outside the door).

Zombies are such a ready-made symbol for "the other among us" that they will probably always resonate; but Rise Again isn't just a zombie novel, it's an indictment of us-versus-them mentality that chooses authoritarianism and control over cooperation and compassion. As such, it does more than scare -- it both moves and enrages, and transcends mere spookiness for something much more satisfying.

Learn 10 growth secrets from Instagram influencers with this $14 training

Eduardo Morales collects enamel pins. Back in 2015, he was frustrated that there was no way on Instagram to easily find the best new pins he wanted to buy. So he built his own. Within a few years, his @pinlord Instagram page had over 145,000 followers and, as a true Instagram influencer, was making Morales […]

Not too many years ago, talking to the air and expecting a response was either the sign of a hardcore Trekkie or someone with an over-developed or diluted imagination. Now, of course, voice assistants like Amazon Alexa and Google Assistant are not only commonplace, they’re actually now in use by more than half of the […]

Save over 30% on the ultimate everyday carry system

The EDC ethos has been around for…well, forever. But it’s entirely possible that you’ve never heard the term EDC before. Of course, the idea that some items are part of your Every Day Carry assortment isn’t new, but in recent years, the thought of each person assembling their own unique version of Batman’s utility belt […]