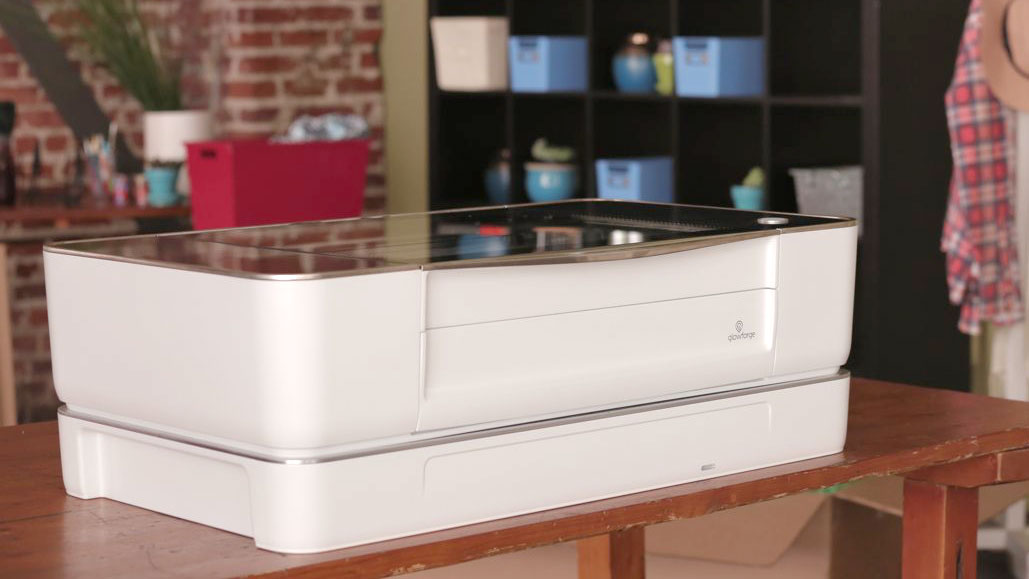 Dan Shapiro, the founder of Glowforge (he's the creator of the Robot Turtles game), gave me a Skype video demo of the machine in action earlier this week. He showed me how to make a votive candle holder out of two different materials. He placed one sheet of thin walnut and another sheet of frosted acrylic on the Glowforge's cutting bed (which has a 12-inch x 20-inch working area). He opened his iPad, which had a live image of the cutting bed displayed on it (the Glowforge has a camera and is conected to Wi-Fi). Dan then dragged the cutting patterns for the pieces of the candle holder onto the video image of the walnut and acrylic pieces. This neat software solution for aligning material was developed by Dean Putney, who was a contractor for many years at Boing Boing, and now works for Dan in Seattle.

After dragging the votive candle holder cutting patterns over the image of the two sheets of material, Dan hit the send button on the iPad. The data was sent via Wi-Fi to the cloud and then to the Glowforge machine. He pressed the print button on the Glowforge and it went to work, cutting the walnut first, and then the acrylic. While the Glowforge was cutting (it took about 15 minutes to cut all the pieces) he showed me some of the other things that he and his colleagues have made, including a beautiful leather wallet with a century-old map of Seattle engraved in it (image above). It was made from a single seamless piece of leather. The Glowforge cut the stitch holes with a 0.001 inch precision, and the lacing looks perfect. This laser cutter is going to change the world of leathercraft. I want a Glowforge for this reason alone. He also showed me a gorgeous Settlers of Catan gameboard with interlocking hexagons made from different kinds of colorful unpainted wood.

When the Glowforge was finished cutting, Dan removed the cut pieces and assembled the candle holder. The pieces fit together perfectly and were designed to stay in place using friction. Dan dropped it in the mail and I took a photo of it:

Glowforge cuts through a quarter-inch of wood with no problem. You can also cut one-half inch by cutting one one side, then flipping the material over and having the camera re-register the material.

Pre-order prices: The base model is $(removed),000 and can handle material up to 20-inches x 12-inches. The pro model is $(removed),000 and has faster and better optics, a HEPA air filter so you don't have to vent the smoke outside, and includes a drawer that opens to allow you to feed longer pieces of material through it, so you can make furniture. Both models will ship in December 2015.

Below, a gallery of things people have made with Glowforge prototypes.