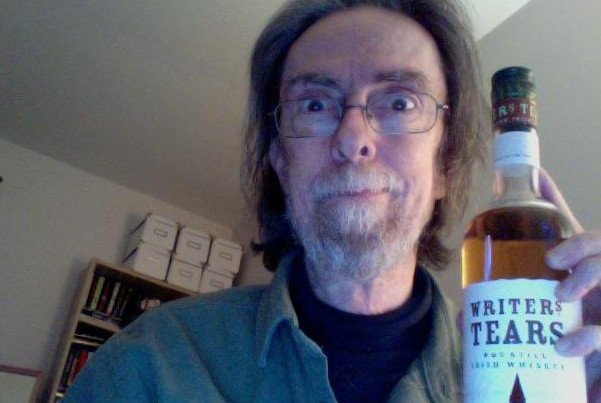 [Editor's note: science fiction novelist Spider Robinson forever influenced my liquor consumption habits with the rhapsodic praises for Bushmill's 1608 Irish whiskey that feature in so many of his books. I've bought rather a large number of bottles of the stuff. So when I got this email (with the subject "Unsolicited testimonial") from him in my inbox this morning, I did two things: ordered a bottle and asked if I could republish the email here here. Spider graciously permitted this. -Cory]

I’ve tried most high-end Irish whiskeys, and always kept coming back to Bushmills 1608. But I just switched loyalties.

I freely confess I was initially attracted by the name alone. I’d have bought my first bottle just to own the bottle, even if the contents had been undrinkable. But it’s not why I’m now already up to my sixth bottle—and at approximately CAN$65 per bottle! In my opinion, it tastes like what God drinks when He’s sitting at His typewriter. Whiskey—uisge baugh—means “water of Life.” This tastes to me a bit like the first tide pool that developed chemistry sophisticated enough to make its own alcohol. I just gave bottles to my siblings for Christmas, and I recommend the stuff unreservedly to you, my friends.

If your local Liquor Commission doesn’t stock it and is too stupid to order it for you, just Google up the online hootch-delivery service called Master Of Malt, and you’ll be drinking it less than a week later without paying shipping, plus they’ll happily sell you either 1 or 6 handsome tasting glasses for a reasonable extra sum. I’ve used MoM to ship the stuff to both NYC and rural Florida without incident; both received breakage-free delivery within 3 days.

Isn’t that glorious? And it tastes good enough to deserve that grand name.

It is made by what is called the pot still method. The pot still is worth googling up: it is the direct lineal descendant of the alchemist’s alembic, first source of ancient magic. The one pictured in Wikipedia (attached) looks startlingly like a stupendous bronze Hershey’s Kiss, the size of a hobbit house, with a little stem sticking out the top representing the smokestack. Or I suppose it could be a half-buried grenade whose pin has just been pulled. Or half of a giant’s brass bra. As I said: ancient magic. Battle, brass boobs, chocolate.

Oh, and while you’re at Master Of Malt’s website, look around and you’ll find the surprising and delightful answer to the age-old question, “Why do some people spell it ‘whisky’ and some spell it ‘whiskey’?” I loved the answer.