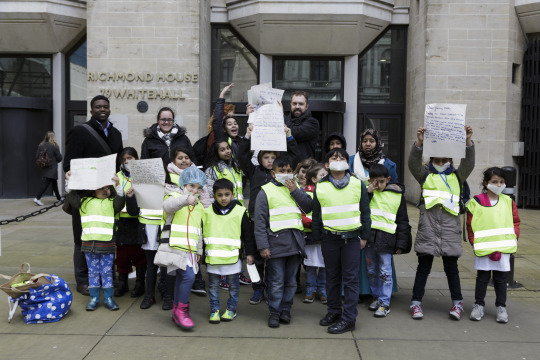 Junior doctors in the UK National Health Service have been attempting to negotiate a decent wage and decent working conditions in their new contract with Health Secretary Jeremy Hunt, who is a terrible person, and who has been publicly libelling the hardworking doctors on the front lines of the UK health system.

Junior doctors from NHS hospitals came in to London’s Limehouse Town Hall to show eighteen kids on their half-term break just what it takes to keep the world’s best health service running - despite attacks by the government on the efficiency and sustainability of the NHS.

After a day of learning how to suture, bandage, plaster and carry out minor operations, they wrote letters to the Secretary of State for Health, Jeremy Hunt, asking him to reconsider the Conservative government’s new contracts for junior doctors.

Despite being aged between 6 - 12, their understanding of the issues currently facing the NHS out-stripped that of many MPs - from it being an orchestrated decline to bring in privatisation to the government trying to run a health service on the cheap in the short term…which will end up costing more in the long term.

They later went on a field trip to the Department of Health where they were barred from entering.

An adult representative was allowed to submit letters they’d written to the Health Secretary. They are currently awaiting an automatically generated, form letter which the current administration likes to call ‘a response’.