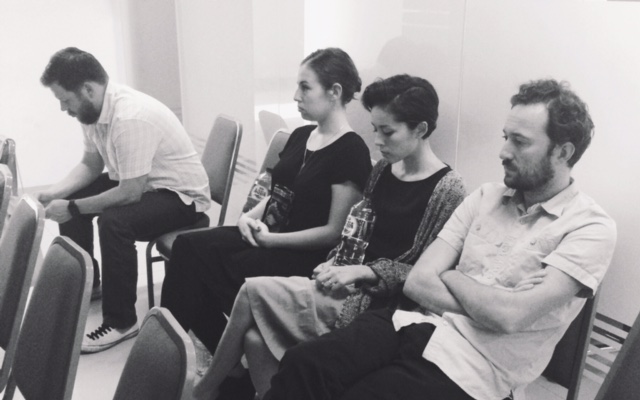 Ewan writes, "In Septempber of last year, American YouTube musician Kina Grannis embarked on a tour of Asia. As usual, her social media presences detailed the process beautifully (I've interviewed Kina myself and have called her the gold standard among YouTube musicians on more than one occasion).

"Then, suddenly, it stops. The tour gets cancelled. And Kina and her band mates seem to have dropped off the face of the earth. 100 days later, afer few (and very vague) updates, they are able to return to the US.

"Today, Kina opened up for the first time, in a lenghty post on her website, about why they were held in Jakarta for 100 days despite not having done anything wrong."

After a few excruciating days of waiting, we’re brought in to the Immigration Office for one-on-one questioning. During my interrogation, I learn that our tour promoters failed to get us work visas, and that as a result of playing our concert we have committed visa fraud — a crime, they inform me, that is punishable by a $35,000 fine per person and 5 years in prison. These are shocking words to hear, but since this alleged crime had been committed with neither intent nor any knowledge of it on our part, it seems too outlandish to be an actual threat, and I am convinced once I've cleared up this misunderstanding everything will be okay. I explain that our tour promoters had ensured us we did have the correct visas, and in the event that was not true, our contract with them clearly states it was their responsibility to secure the visas--not ours. The officials don't seem to care. Our names are on the documents, so they are holding us accountable. They lock away our passports and open a criminal investigation.

We leave the Immigration Office and the tour promoters again reassure us that everything will be fine. “Things are being resolved. We’ll be flying out soon.” Day after day we are told to pack our bags, and day after day our freshly inflated hopes are crushed beneath the weight of another sunset. One day we’re told we’ll be flying out between 4 and 7am, they’ll call our room when our passports are delivered, get sleep while we can. When I wake up at 9am to no news I am shattered. Another day we wait with our luggage in the hotel lobby for our passports to arrive, but they never come. The heartbreaking realization that I need to start canceling tour dates sets in. As the days pass, I announce the cancellation of my shows one by one, each time hoping it will be the last. Eventually the entire tour is scrapped. I am completely devastated. Not only because the tour has ended before it’s begun, robbing me of the joy of sharing my music with the people who have made my career possible, but also because I am letting people down. I hear about fans who have bought flights from Australia and Japan to come see the shows and are frustrated and confused by the sudden and unexplained cancellation. I feel sick and scared and powerless.