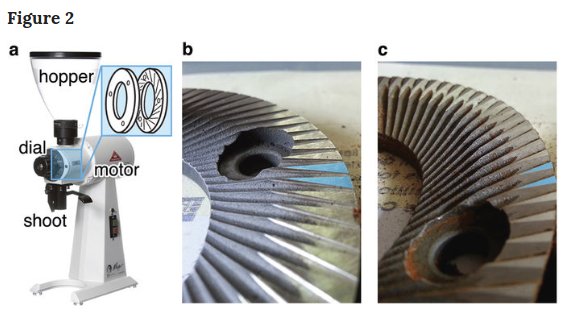 A new study in Nature by University of Bath chemist Christopher Hendon and colleagues from various universities and coffee shops finds that cryogenic freezing of coffee beans prior to grinding them produces a more uniform grind that allows for optimal extraction.

The paper is fascinating and easy to understand, and may result in some changes in how espresso shops store and handle their beans.

That said, there are a couple of important caveats here: first, not all extraction methods are as grind-sensitive as espresso. Espresso is extracted at 8-9 atmospheres, and if the grinds in the basket aren't uniform, the hot water will force cracks in the puck and rush through them, overextracting a small portion of the grinds and leaving the rest relatively untouched.

By contrast, cold brewing, drip, or even moderate-pressure extraction like Aeropresses are nowhere near so grind-sensitive, so you'll likely see a much smaller difference from cold beans if you use these methods.

The second caveat is that keeping your beans in the freezer is a bad idea: freezers are very arid, and the sweet, volatile oils in the beans will quickly sublimate out of the solids, making for a more bitter cup. So if you're going cryogenic, you need dry ice, not your kitchen freezer.

The easiest way to improve your coffee is to improve your beans. The "specialist" roasters, including the hedge-funded Intelligentsia and Stumptown (part of the same conglom now, which also includes Peet's) start by discarding all the beans that aren't uniform in size and ripeness. Roasters have to keep the heat on until all the beans are roasted, and very large or very green beans mean that the roasting process has to continue after the smaller, riper beans are done, so they end up scorched and bitter. Hence the ammoniac tang you get when you open a bag of grocery store (or Starbucks) coffee, compared with a much sweeter smell from specialty coffee.

That sweet smell is the low-temperature volatiles that you lose by freezing, overextracting, or overheating coffee. It's why specialist roasts are so fragrant and full of fruity, acidic and caramel notes.

Cold-brewing preserves whatever low-temperature volatiles survive roasting, so you can get a much better cup out of grocery-store beans than you'd get if you heated them (this is why Starbucks' cold-brew is so much nicer than its espresso or drip).

From a physical chemistry perspective, the temperature dependence presents many interesting questions. Given the minimal difference between liquid nitrogen and dry ice temperatures and the reversibility of the cooling, we question whether it is possible in the future to cryogenically store roasted coffee at these temperatures. Indeed, water content in the roasted bean is of paramount importance at these temperatures, as water expansion may lead to be fracturing. Also, prolonged exposure to water can result in the solvation of flavoursome molecules, thereby decreasing the lifetime of the frozen product. But if these variables were managed, there are a host of subsequent implications for the storage and relative quality assessment allowing for access to direct year-to-year comparison of crop quality. From a consumption perspective, cooling of coffee beans significantly decreases the rate of mass loss through volatile sublimation/evaporation. Thus, coffee that is ground and brewed cold could potentially demonstrate increased aroma and or flavour in the eventual brewed cup.

From an industrial perspective, the yield of extraction is paramount. Grinding colder coffee beans produces a more uniform particle distribution, with a decreased particle size. While the decreased particle size will tend to speed up extraction due to the larger surface area, the increased uniformity should minimise the amount of wasted bean, which is discarded without being extracted to completion. Whilst active cooling of either the coffee beans or burrs is energy consuming, the benefit of cold coffee grinding may offset this cost with more efficient extraction from the smaller particles.

Coffee / ice to see you / not food / scholarship / Science