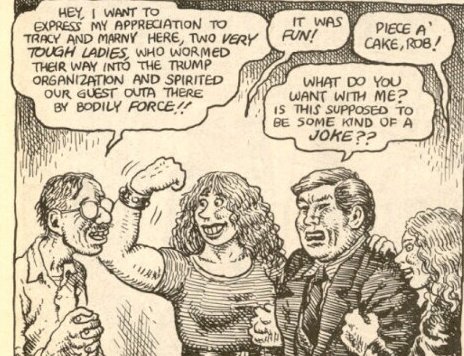 R Crump's "Point the Finger" series of comics about his disgust with America appeared in the first run of Hup! in 1989.

Crumb took aim at many targets, among them real estate mogul Donald Trump, who, in issue 3, was confronted by a raging Crumb who called him "one of the most evil men alive" and a "slime-ball," before Trump smarmed his way to victory over Crumb, winning the affection beautiful women and sending the police with guns drawn to confront Crumb for "wasting his time." Then, in a Crumbian reversal, he imagines a surprise ending where he is triumphant.

It's Crumb all over: weird, self-deprecating, sexist, and before its time. Long before "Make America Great Again," Crumb had Trump's number.