This man is building the business of DIY assault rifles 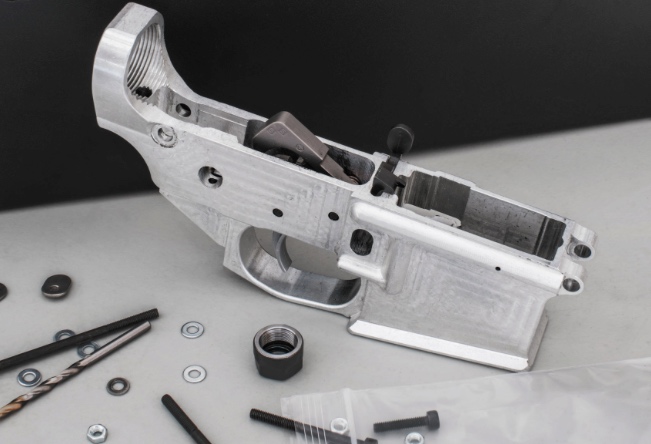 Remember Cody Wilson, the founder of Defense Distributed who caused chaos last year with his design for a 3D printed gun, The Liberator? Now, Wilson and engineer John Sullivan have developed a $1500 desktop CNC mill, called the Ghost Gunner, that cranks out the key component in assault rifles. Now you can make your own AR-15! There's a waiting list to buy one and the money is going to Wilson's lawsuit against the State Department. From Rob Walker's excellent feature in Bloomberg Businessweek:

Most people can purchase a pretty good factory-built gun for $1,000. Even so, Wilson got 10 orders on Day One and started raising the price, soon cutting off pre-orders at 500. Sullivan submitted redesigned specs to suppliers by mid-December, with Wilson, Sullivan, and Denio building the earliest units themselves. They started shipping in April 2015.

Gradually, Wilson put together an assembly team—contacts from his network, random supporters who reached out via Twitter, and so on. “It’s torture man, getting going,” he says. “But here we are. It’s been a full year of Ghost Gunner shipping.” The enterprise just surpassed 2,000 units shipped. (An upgraded Ghost Gunner 2 debuted on June 21 at $1,500; you can get on a waiting list for $250.)

Sullivan has since transitioned to a “consulting role.” He spoke to me, somewhere en route to Oklahoma City, from his van, which is where he and his fiancée essentially live, having sold most of their possessions. He’s opted for a low-expense, permanent-vacation lifestyle, he says, and can now pick and choose the projects that interest him.

Back at Jim’s, Wilson says the Ghost Gunner business could expand, even internationally—or could be snuffed out by regulatory caprice. His partner Denio has taken an interest in a few orders from engineering educators and now imagines a spinoff business—thoroughly rebranded—bringing desktop CNC machines to that market. (That said, Denio underscored to me that his ideological goals trump his entrepreneurial ones: “I wouldn’t mind living on the street and eating garbage if I knew our Second Amendment was protected.”)

Wilson says he wants the product to succeed and satisfy the customers who’ve supported him. In May, Defense Distributed had its first trade-show booth, at a survivalist expo in Dallas. But it’s pretty clear that engineering and business aren’t a rush for him but a means to an end. “I’m just trying,” he says, “to win my lawsuit.”


detail of photo by Bryan Schutmaat