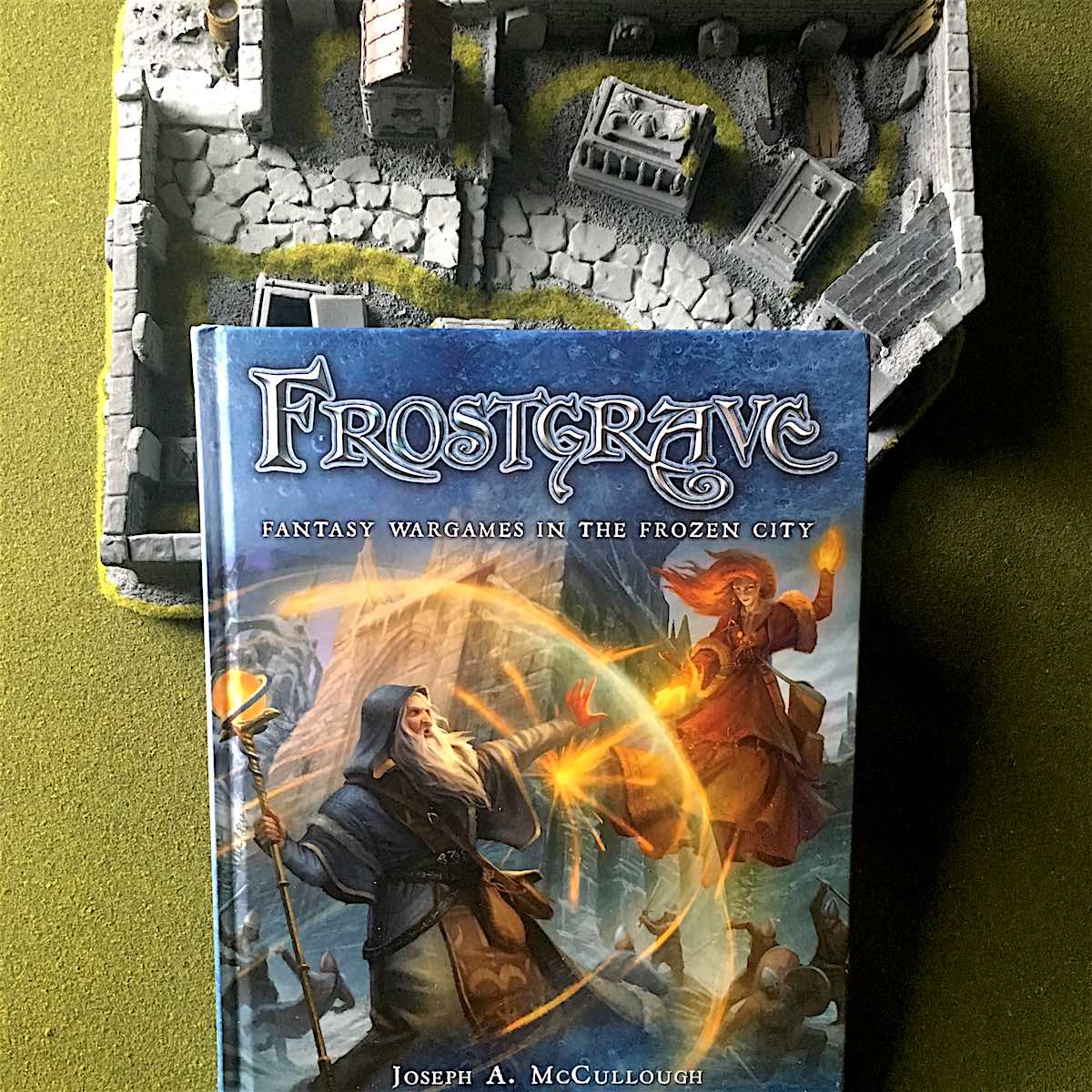 by Joseph A. McCullough (author) and Dmitry Burmak (illustrator)

With the great success of Dungeons & Dragons 5th edition, the popularity of shows like Stranger Things riding a growing 80s nostalgia wave, and the success of game-based YouTube channels like Tabletop and Critical Role, there’s no doubt that we are in a tabletop/RPG gaming renaissance.

Two of the hallmarks of modern fantasy, sci-fi, and horror games are faster game play and more streamlined rules. The skirmish game, played with small numbers of miniatures, and the hybrid board game, combining miniatures and a game board, are all the rage these days. Into this moment of 80s D&D nostalgia and newfound enthusiasm for tabletop gaming comes a game that seems designed to hit all of the sweet spots: Osprey Publishing’s Frostgrave: Fantasy Wargames in the Frozen City.

Everything about Frostgrave is about economy. The book itself, gorgeously and profusely illustrated by Russian artist Dmitry Burmak, is compact, under 8 x 10, and only 136 pages. The backstory is simple, but highly evocative, the rules are basic and concise, trading off realism for fun. To play, you need only this inexpensive rulebook, around ten miniatures for your warband (taken from any 28mm fantasy range), and whatever terrain and random monsters you might encounter during the game. And some 20-sided dice and a tape measure. Frostgrave can be played by up to 8 players (2-4 are best).

In the world of Frostgrave, a thousand years ago, a flourishing city of magic, called Felstad, was plunged into a deep freeze after a spell massively backfired on a careless wizard. Now, a millennium later, the city has mysteriously begun to unthaw. Wizards from all over the land are flooding back, flanked by small warbands to protect them as they loot the city of its treasures and ancient magic.   The Frostgrave game does an impressive job of boiling down the dungeon-delving experiences that many of us remember as D&D-playing teens. The goal of the game is to take your wizard (armed with a series of spells that you have chosen) and his/her warband into the city to try and recover as much treasure as possible. You have to locate the treasure and move it off to your table’s edge. Along the way, you fight competing wizards and random monster encounters and you overcome traps. There is no Dungeon Master in Frostgrave. The monsters are generated on a random encounter table. Even though the rulebook is modest in size, they still managed to pack in a campaign system and a number of scenarios. There’s a sweet little bestiary, too. Frostgrave gets most of it narrative/RPG elements through campaigning over multiple games. You also get to spend your acquired treasure between games so that you can hire better warband members, buy magical items, etc.

Frostgrave is not D&D. It’s a miniatures game, not an RPG. But it still manages to offer a lot of the essence of the retro fantasy RPG experience in a tabletop game that’s quick and easy to play, without a lot of upfront investment. If you’ve been thinking about getting into (or back into) tabletop gaming, Frostgrave is a perfect place to start.