The North Pole is 36 degrees warmer than normal 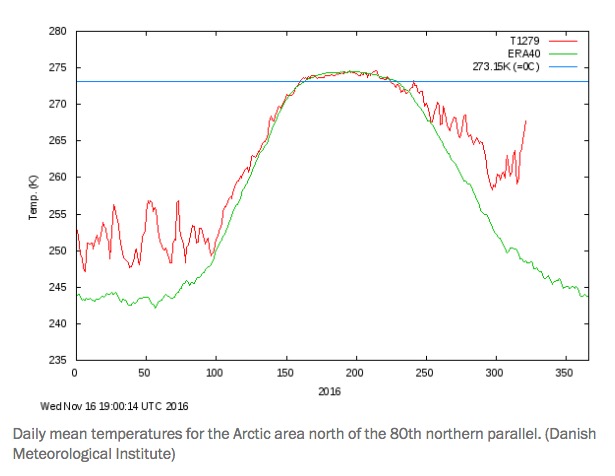 It's polar night in the Arctic, and temperatures ought to be plunging. But the opposite is happening. Meanwhile, sea ice in the Arctic is at a record low.

This is the second year in a row that temperatures near the North Pole have risen to freakishly warm levels. During 2015’s final days, the temperature near the Pole spiked to the melting point thanks to a massive storm that pumped warm air into the region.

So what’s going on here?

“It’s about 20C [36 degrees Fahrenheit] warmer than normal over most of the Arctic Ocean, along with

cold anomalies of about the same magnitude over north-central Asia,” Jennifer Francis, an Arctic specialist at Rutgers University, said by email Wednesday.

Last week, Dean told you about the lake at the North Pole, a pool of melted ice captured on camera by the North Pole Environmental Observatory webcams. At Climate Central, Andrew Freedman provides some really fascinating context that illustrates the changing nature of, well, nature … and draws a big, heavy underline on how difficult […]