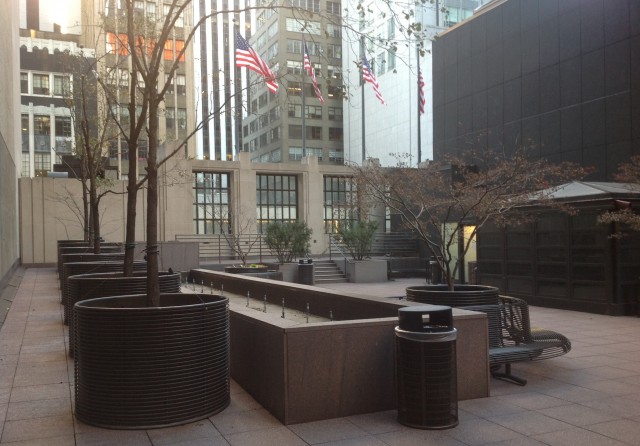 In order to get permission to add an extra 20 floors to Trump Tower's plan, Donald Trump had to promise to build public amenities, "including access to restrooms, an atrium, and two upper-level gardens."

These gardens are on the fourth and fifth floor, and you are entitled to visit them, just as Nick Turse did -- and if you're lucky, a heavily armed Secret Service agent and his boss will come by and ask you a bunch of nosey questions, just like they did for Turse.

Trump is using Trump Tower as a second White House, and he's billing the US taxpayer for the rooms that the Secret Service are using as their base-camp while they guard him.

Priately owned public spaces are hidden in plain sight across America's cities, theoretical public places that the public hardly ever visits -- even so, the millionaires and billionaires who own them would like to do away with them.

My new paramilitary pal fit in perfectly with the armed-camp aesthetic that’s blossomed around Trump Tower. The addition of fences and concrete barriers to already clogged holiday season sidewalks has brought all the joys of the airport security line to Fifth Avenue. The scores of police officers now stationed around the skyscraper give it the air of a military outpost in a hostile land. (All at a bargain basement price of $1 million-plus per day for the city of New York.) Police Commissioner James O’Neill recently reeled off the forces which — in addition to traffic cops, beat cops, and bomb-sniffing dogs — now occupy this posh portion of the city: “specialized units, the critical response command, and the strategic response group, as well as plainclothes officers and counter-surveillance teams working hand-in-hand with our intelligence bureau and our partners in the federal government, specifically the Secret Service.” The armed man in tactical gear who had joined me belonged to the latter agency.

“You one of the reporters from downstairs?” he finally asked.

“Yeah, I’m a reporter,” I replied and then filled the silence that followed by saying, “This has got to be a new one, huh, having a second White House to contend with?”

“Yeah, pretty much,” he answered, and then assured me that most visitors seemed disappointed by this park. “I think everyone comes up thinking there’ll be a little more, but it’s like ‘yeah, okay.’”