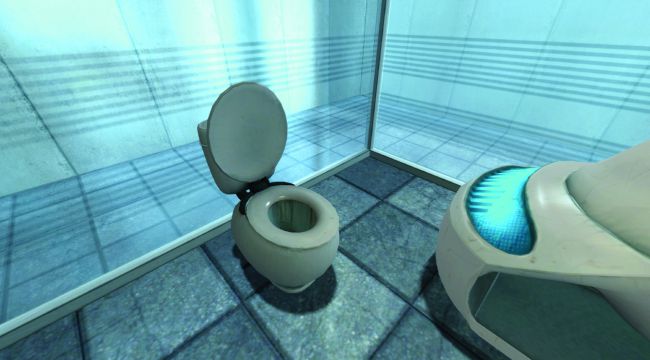 People need toilets, or the poop starts piling up, so video games that are supposed to simulate human environments need toilets to attain willing suspension of disbelief.

But toilets are rarely critical to gameplay: they are atmospheric, not instrumental. The way that studios approach their shitters tells you a lot about the studios: how they're drawn, whether they flush, what's inside them...

I asked several developers what their favourite videogame toilet was, and the same game kept coming up: Frictional’s psychological horror game Soma. “There’s an incredible toilet in the first few minutes,” says Brendon Chung. “You have fine analogue control over the toilet seat and flush handle. Flush it and you see the water swirling in the bowl. This is an absolutely luxurious amount of control reached by no other developer.”

“One of the big problems in game design is figuring out what to fill the world with,” says Frictional’s Thomas Grip. “Offices and storage rooms are used a lot, but it can be hard to make them feel natural. But with bathrooms the space is well-defined and there are a lot of simple and fun interactions such as flush handles, stall doors, and hand-dryers.