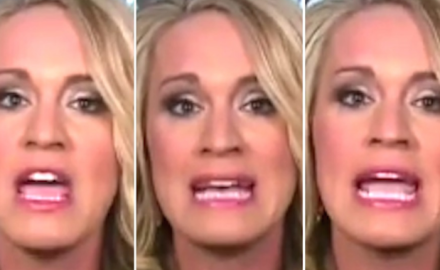 We have officially entered the post-fact American era. Donald J. Trump presidential surrogate Scottie Nell Hughes, known for being one of the most wack in Trump's pack, explicitly said on public radio's “The Diane Rehm Show” yesterday that lying is official Trump strategy.

Hughes joined The Diane Rehm Show to discuss the media's role in covering the Trump administration. If the campaign and transition are anything to go on, Trump's White House will not overly concern itself with reality. The whole segment is here, but another member of the panel, The Atlantic's James Fallows, flagged one particular moment of the conversation. Around the 14-minute mark, Hughes illustrated a defining principle of Trumpism: There's no longer such thing as fact, because anything is true if enough people believe it.

"Well, I think it's also an idea of an opinion. And that's—on one hand, I hear half the media saying that these are lies. But on the other half, there are many people that go, 'No, it's true.' And so one thing that has been interesting this entire campaign season to watch, is that people that say facts are facts—they're not really facts. Everybody has a way—it's kind of like looking at ratings, or looking at a glass of half-full water. Everybody has a way of interpreting them to be the truth, or not truth. There's no such thing, unfortunately, anymore as facts.

"And so Mr. Trump's tweet, amongst a certain crowd—a large part of the population—are truth. When he says that millions of people illegally voted, he has some—amongst him and his supporters, and people believe they have facts to back that up. Those that do not like Mr. Trump, they say that those are lies and that there are no facts to back it up."

God help this nation of ours.