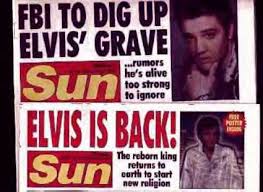 Mark Marino writes, "Boingers might be interested in this new free 3-week course I'm co-teaching with UnderAcademy College founder Talan Memmott: How to Write and Read Fake News: Journalism in the Age of Trump. It starts Jan. 20, of course."

In the age of the RealFakeDonaldTrump, the fourth estate Journalism has been usurped by a fifth estate, Journullism.

In this state, the old value of truth has been replaced with a more realistic 'trust me on this one.' Facts are replaced with free-flowing fictions. And Journalism is replaced by jaunts into the imaginary.

This three-week open course will cover all the basics in producing and consuming real fake news.

In this course, we will teach: The five Ws of Fake News -- who, what, where, why, and WTF, Digital Manipulation, photoschlopping (digital photography manipulation) hoaxing for fun and profit, and mild misleading. With a heavy emphasis on easing ethical anxieties, the course will help you learn to navigate the vicissitudes of a world unencumbered by empirical facts.

Reality TV was the first wave. The age of the Surreal Society is Upon us. And the supreme commander is Donald Trump. Don't sink under the waves of this tsunami of fake tsnews!

How to Write and Read Fake News: Journalism in the Age of Trump [Underacademy College]