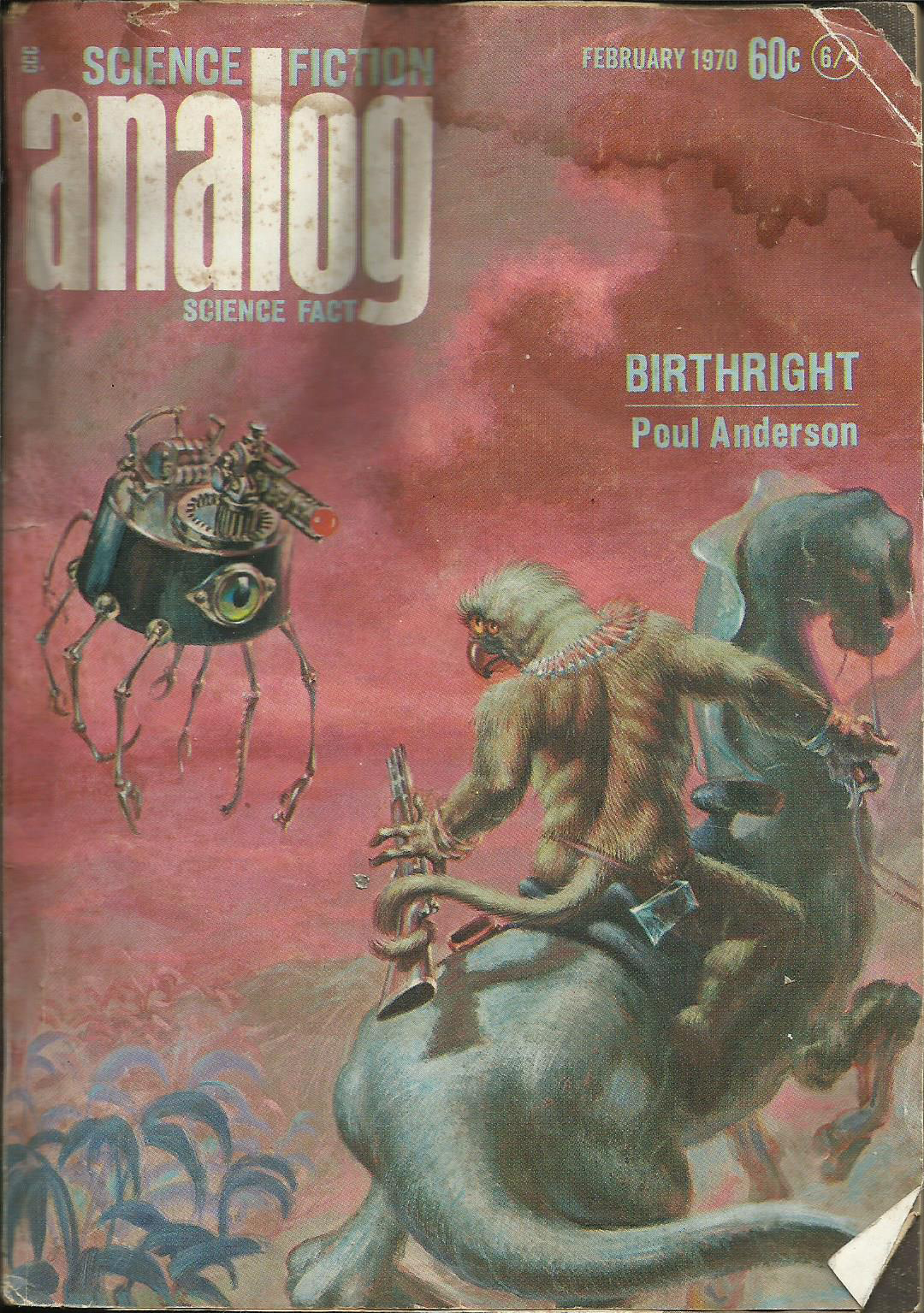 Welcome to Sci-Fi Sundays! I'm in my mid 30s and grew up steeped in science fiction. From as far back as I can remember, the books on my family bookshelf bore the names of Isaac Asimov, Ray Bradbury, Arthur C. Clarke, H.G Wells, and the like. The books seemed, to my immature eyes, like such odd and frustrating things. They had these enticing and rich illustrations on their covers, but inside, mostly only walls of text that I wouldn't learn to appreciate till my age hit double digits.

Occasionally I'd stumble upon something like Analog, and be delighted to find illustrations inside, sparse as they may be. Something about this experience left a permanent mark on me, and the illustrations of science fiction pulp has always seemed somewhat magical. It isn't usually the highest quality art work, but it was always something new and interesting, either some imaginary creature or piece of machinery.

About 10 years ago, I was given a treasure; boxes and boxes of science fiction pulp. I have tons of Analog, some Perry Rhodan, Worlds of If, Galaxy, and a few others with publication dates ranging from the late 50s through the 80s.  While each issue should, in my opinion, be scanned page by page and preserved forever, I'm only setting out to do so with the illustrations. In this series, I'll scan an issue (or two or 3 if they only have cover art),  and share the illustrations with you. Sadly, I can't share the musty smell of the pages, but I may share some of my observations and thoughts on the issue, and I'd love to hear yours.

Let's kick this off with the above issue:

The February 1970 issue of Analog seems almost like a bizarre amalgam of modern pop culture items; Is that a Viper probe droid from Star Wars? Is that bird man riding on Nessie? Illustrated by Kelly Freas (you'll see that name a LOT during the 70s), the cover illustration goes to the novelette Birthright, by Poul Anderson. As with anything more than just a few years old, it is fun to look at the cost of the issue, only 60 cents.

Like most issues of Analog, this one is packed with illustrations, many by Kelly Freas. The styles swing wildly from minimalist scratchings to what appear to be painted works.

This issue has a section in the middle that describes how solar wind works. Remember, this is Analog Science Fiction / Science Fact. There are a couple diagrams, but nothing exciting, and I've opted not to scan them.

All illustrations from this issue are included below, along with credit to the illustrator, and the story they are associated with.

This is easily my favorite illustration in this issue. The style of the spaceman's helmet and suit are just wonderful. His air tank almost seems Dr. Seussian!

Peter Skirka from Dali, For Instance

I have no idea what is going on here. This is one of those illustrations where reading the story reveals the meaning of the illustration, but I'm not going to spoil it for you, that would make it boring.

One thing I always enjoy is when there are creatures shown that are both extremely alien, and also apparently intelligent. Take the character on the left for example, there are clothes, tools, etc. It makes me wonder what the rest of that creature's culture and civilization are like. Maybe I'll have to read this story!

Kelly Freas from The Fifth Ace

Kelly Freas From The Fifth Ace

Kelly Freas from In Our Hands, The Stars

Note that even though this is the same illustrator as the others, this story has a completely different art style. These appear to be paintings that were scanned in.

Kelly Freas In Our Hands The Stars

The rear cover isn't an illustration, but sometimes it is fun to look at the advertisements as well.

Today I chanced across a posting from someone who, in 2002, tracked down the maker of the unusual whiskey glass that the replicant-hunter Deckard drinks from in Blade Runner. They learned then that it had been in production for thirty years and was still available, and so it is today. Now, of course, you don't […]