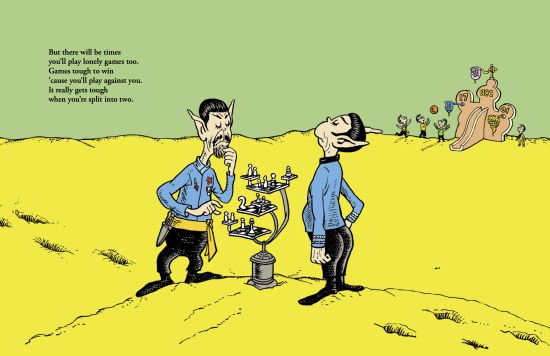 The Seuss estate argued that the book infringed its trademarks and copyrights. Now, the United States District Court for the Southern District of California court has ruled on the trademark question and found that there is no valid trademark claim thanks to "nominative fair use," and also indicated that it would be favorably disposed to fair use defenses on the copyright question.


The estate has two weeks to prove copyright damages and to amend its trademark claims.

Congratulations to Comicmix for this stunning victory for creativity and mashup culture!

United States District Judge Janis Sammartino dismissed the trademark claims under the doctrine of nominative fair use, and largely agreed with ComicMix’s position that fair use protects the book from copyright infringement claims. Judge Sammartino found that the book is “a highly transformative work that takes no more than necessary [from Dr. Seuss’s books] to accomplish its transformative purpose and will not impinge on the original market for Plaintiff’s underlying work.” She emphasized that the case has broader significance: “This case presents an important question regarding the emerging ‘mash-up’ culture where artists combine two independent works in a new and unique way. … Applying the fair use factors in the manner Plaintiff outlines would almost always preclude a finding of fair use under these circumstances. However, if fair use was not viable in a case such as this, an entire body of highly creative work would be effectively foreclosed.”