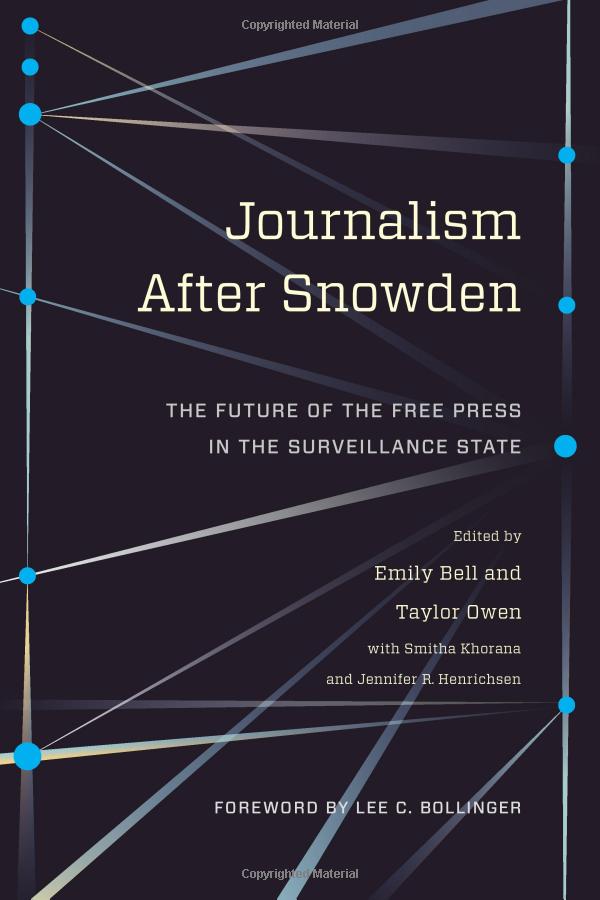 Also included is Ron Deibert (previously), whose Citizen Lab research group at the University of Toronto has broken some of the biggest surveillance stories in this young century. Diebert's chapter, "Targeted Surveillance," recounts the story of Ghostnet, the Chinese government surveillance operation uncovered by Citizen Lab, which targeted dissidents, foreign governments, embassies, and other threats to Chinese elite hegemony.

Deibert's chapter goes on to trace the role of European, Canadian and US companies like Bluecoat and Finfisher in giving these surveillance capabilities to even less trustworthy governments than Beijing, and the consequences for opposition groups, human rights activists and journalists.

Importantly, Deibert's chapter ends with urgent recommendations for journalism organizations that are needed if they are to function in a world where cyber-arms-dealers outfit governments with all the surveillance tools they can afford. It's not enough to ask whether technology is good or bad for freedom — we must find ways to make it good for freedom.

While the Snowden disclosures have opened a window into the phenomenal extent to which all digital communications are at risk of surveillance to governments, and journalists and others are developing safeguards, there are unintended impacts of the disclosures that muddy the waters. The disclosures have alleviated pressures on governments such as those of China and Russia, and have provided a model of how to undertake advanced computer espionage for countries just starting to develop such programs, and thus created a convenient excuse to put in place more expansive domestic-level information controls. Therefore, the risks around digital media for journalists are likely to expand in the short term.

Addressing these challenges is daunting, but there are steps that should be taken immediately:

*
Media outlets can implement HTTPS encryption on their websites by default. While the costs are significant, such a basic step will do much to alleviate a certain class of risks and establish a norm for the industry.

*
Journalism programs can include digital-security modules as foundational. There is a pressing need to educate entire communities as to best practices and instill a culture of security in the journalism profession from the schools to the newsrooms and beyond.

*
Journalists and editors should evaluate the digital-security practices of their organizations in a comprehensive fashion. More independent and systematic research is required to evaluate existing practices and the risks to journalists around digital media in specific cases.

*
Secure communications tools are necessary but not sufficient. Changes in communication practices are essential. No amount of sophisticated encryption will immunize a journalist from the full range of growing risks. Some of the growing information controls around digital media, such as laws, regulations and practices, cannot be counteracted with tools and software. Even while some technological proficiency can help guard against targeted digital threats, behavioral changes are equally as important.