Diamond Yoda pendant to be auctioned 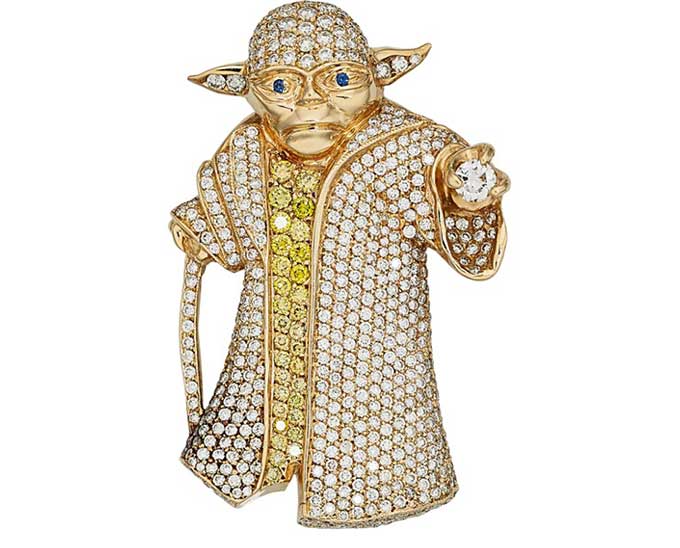 This Yoda pendant listed by Heritage Auctions "features full-cut yellow and near colorless diamonds weighing a total of approximately 9.00 carats, set in 14k gold." The estimated value is $2,500 - $3,500. will a lucky Boing Boing reader place the winning bid?

An avatar for all time, Yoda, the wise can be with you always. Instantly recognized as one of the most beloved characters in the Star Wars narrative, this custom made pendant is whimsical and fun. It can be worn on a cord or chain or easily modified by a jeweler to wear as a brooch. Appropriately, Yoda is covered with diamonds, an ancient gemstone that can take billions of years to form. His robe is made of white and yellow diamonds totaling approximately 9.00cttw. A single round brilliant cut diamond held in Yoda’s outstretched hand has a known carat weight of 0.46ct.

Could this single diamond represent a kyber crystal? Or symbolize the Force? To quote Yoda, “Long ago in forgotten times, when the Sith and Jedi fought for control of the galaxy, weapons there were, of unimaginable power. Always at their heart, a kyber crystal was.” Gem quality diamonds are cut to exact proportions to accentuate their ability to reflect light. The dispersion of white light into spectral colors is diamonds’ primary gemological characteristic. Since Yoda lost his light saber in his legendary duel with Darth Sidious, and the lightsaber reflects the Force of the Jedi who holds it, a diamond is the perfect replacement.