Party Discipline: a novella set in the world of Walkaway 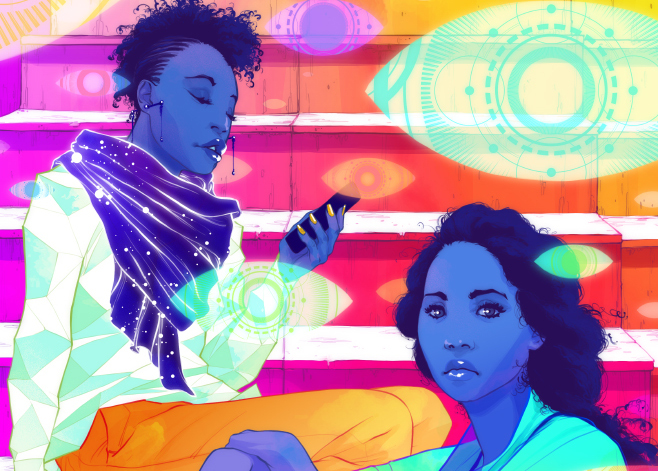 Party Discipline: a novella set in the world of Walkaway

I wrote the novella Party Discipline while I was on my grueling US/Canada/UK tour for my novel Walkaway, last spring. Today, Tor.com publishes the tale, in which two seniors at Burbank High confront their uncertain future by planning a "Communist party" in which they take over a defunct factory and start it up again, a tangible, dangerous, playful reminder that material abundance is here, it's just not evenly distributed.

The piece is accompanied by a gorgeous original illustration by Goñi Montes. It's been long enough since I wrote this that I was able to re-read it with fresh eyes and found that I enjoyed it immensely, and I hope you agree.

Antoine met us at a froyo place off San Fernando, the sketchy part near the dead Ikea that had been all cut up for little market stalls that were mostly empty. I hadn't seen him since we'd been freshmen and he'd been a senior, and in the years since he'd got strangely greyish, his skin sagging off his face and his hair shot with white, like he was an old man. He looked like he hadn't been sleeping much, either.

He made a sign at us, a thing with his hands like the kids had done to pass messages around the classroom back when we'd been kids. It took me a second to remember what this one meant: phones down, school cop's coming. I couldn't figure out what that was supposed to mean, but Shirelle got it and reached into her purse and shut her phone down. Now I got it, I did the same. We'd both been infected before, of course, drive-by badware that let some creepy rando spy on us through our phones, but then we got more careful. But he wasn't worried about randos spying through our phone: he was worried about cops.

You think Burbank PD is going to bother with you? I wanted to ask, but fact was, maybe they would. Why not. Once they bought that kind of thing, why wouldn't they want to use it every chance they got? I probably would.

"Damn." He looked us up and down, not like a perv, but like a grownup judging a little kid. "You two are so young. I don't know if this was such a good idea."

Shirelle gave him an up-and-down of her own. "Antoine, we're only five years younger than you, fool. Smart, too. Besides, it was Lenae's idea, not yours."

That was news to me. Far as I knew, he'd had the idea, told Shirelle, and she'd said, Oh, Lenae said the same thing. But the way he shook his head, I knew it was true -- he'd got the idea from me. That made me feel pretty badass, tell the truth.