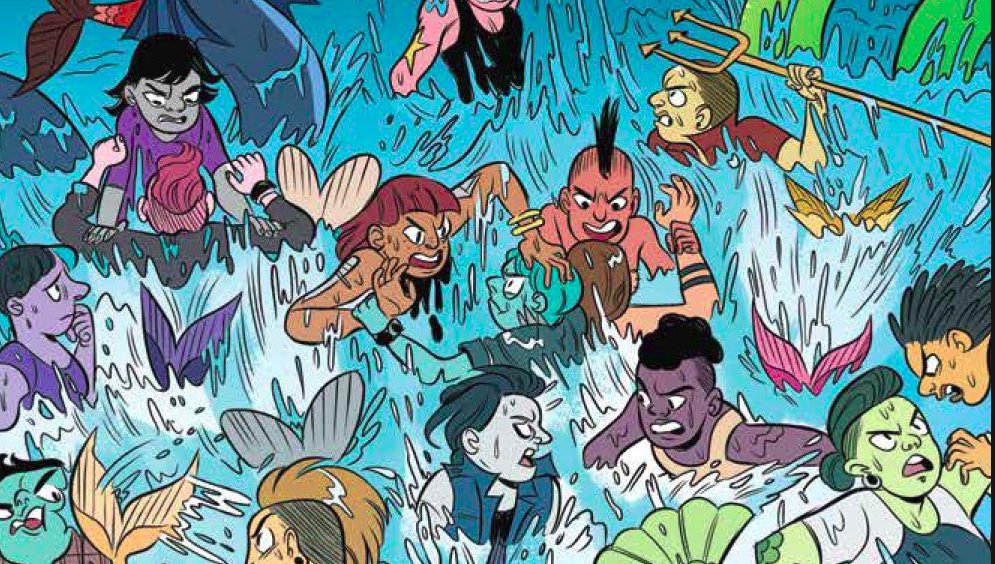 The Lumberjanes (previously) are headed toward a TV screen near you, but despite the furious effort that must entail, it's a sure thing that no one is neglecting their duties to the comic book. Two more collections have been published since I last reviewed the collections, and they are pure Lumberjanes dynamite: anarchic, sweet, funny, and full of more memorable characters from more magical races than the entire Monster Manual and the Fiend Folio.

In volume 5, Band Together, we meet a race of rock-and-roller merfolk (and their unruly sea serpent pals) and learn an important lesson about loyalty and thoughtfulness and all the ways that selfishness can masquerade as altruism. The tale of how April tries to get the riotgrrl merwymyn's band back together isn't just madcap adventure (though there's plenty of that!): it's also a surprisingly complex and subtle story about empathy and sympathy, selflessness and self-aggrandizement that has enough chewy ambiguity to fill a Bronte novel, all told in four-color glory...with sea-serpents!

Volume 6, Sink or Swim, features a new camp counsellor called Seafarin' Karen (not "Seafaring Karen," please -- the rhyme is important) and a gang of vindictive selkies who have stolen her boat because (they think) she has stolen one of their pelts. If you're into Lumberjanes lore -- with all the transdimensional dinosaur shenanigans and crusty old shape-shifter mysterious bear-women that implies -- you will find this volume especially satisfying. It will also teach you many important lessons about learning to tie good knots. There's more than one kind of complex topology at the center of this tale.

Lumberjanes keeps moving from strength to strength as the team brings in more guest-talent, takes fearless risks with nontraditional storytelling moves (there are some beautifully handled flashbacks in these volumes), and introduces characters with the wild abandon of someone dancing like no one was watching.