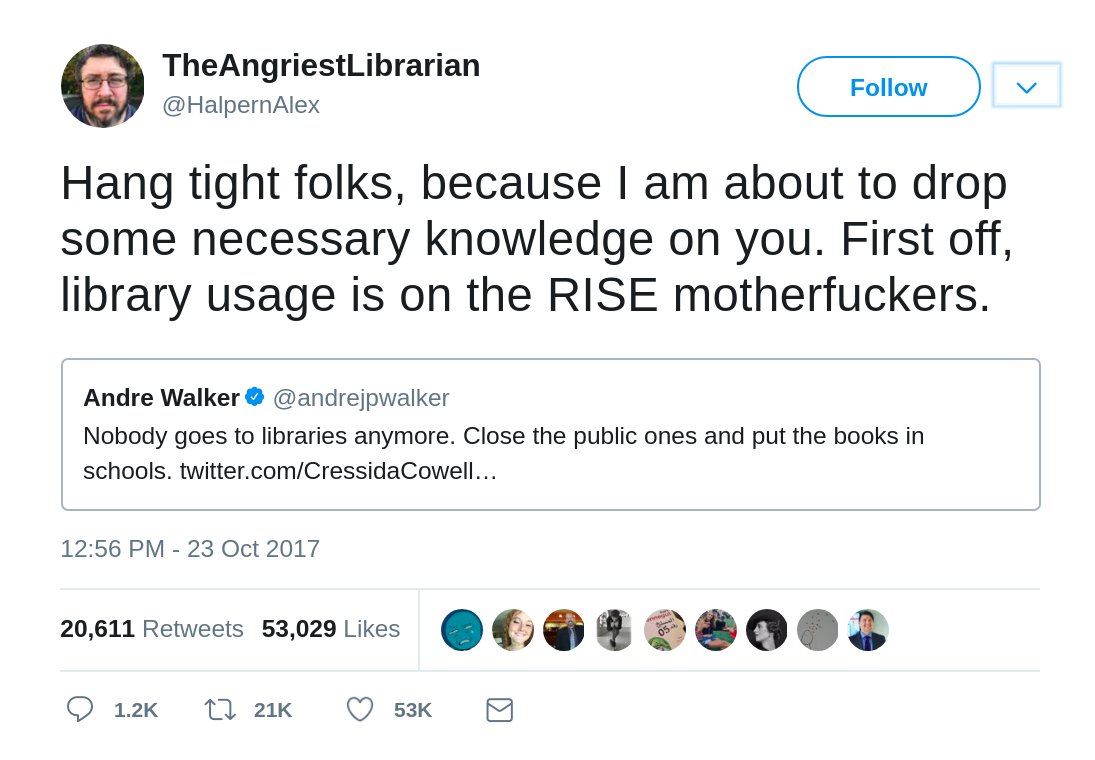 When New Yorker columnist/blowhard Andre Walker "Nobody goes to libraries anymore. Close the public ones and put the books in schools", librarians all over the net gave him what for, and one of the best responses came from self-described "Angriest Librarian" Alex Halpern, a student librarian in Portland, OR, whose tweetstorm went viral.

In an editorial for Citylab, Halpern makes the case for libraries in the information age, when inequality is rampant and libraries remain one of the last places in the world where you are treated as a patron, not a customer.

Hang tight folks, because I am about to drop some necessary knowledge on you. First off, library usage is on the RISE motherfuckers. https://t.co/reWrJj3XCo

The rant that led me to my brief bout of Twitter fame was likely popular because of my stereotype-defying profanity and insults, but the fact that it resonated so strongly with librarians was what convinced me that we are on the right track as a profession. Those mousy, quiet librarians are a thing of the past, if in fact they ever existed at all outside of Hollywood. Today, depending on the community they serve, a public librarian is part educator, part social worker, and part Human Google. What they aren’t is a living anachronism, an out-of-touch holdout in a dying job who’s consigned to a desk, scolding kids for returning books a few days late.

An urban librarian in a struggling neighborhood, like Chera Kowalski in Philadelphia’s Kensington, is just as likely to be saving lives by giving Narcan to overdosed patrons as she is to be recommending a new Young Adult series. The new model of librarianship is about embracing more than just books—it’s about making a positive impact on the lives of patrons. My liberal use of the word “motherfucker” may have been the most popular aspect of my Twitter rant, but the most important was my message to LGBT teens, and to immigrants, and to the homeless and poor: The library is a safe place for you to come and get what you need.

The Angriest Librarian Is Full of Hope [Alex Halpern/Citylab]