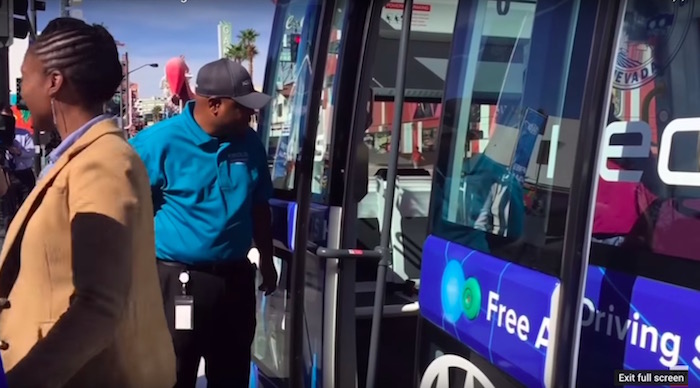 Las Vegas unleashed its first driverless shuttle packed with passengers yesterday, and within two hours it was hit by a delivery truck with a human driver.

Apparently, the shuttle's sensors recognized the truck – which was backing up – so the shuttle stopped to avoid an accident. The truck, however, did not stop and it hit the shuttle. Luckily, it was minor and no one was hurt.

Fortunately, no humans were injured in the crash, the city said.

The eight-passenger shuttle is currently offering free rides to people along a half-mile loop in the city's Fremont East "Innovation District." The operation is part of a 12-month pilot program, the city said.

MARTY is the name of this 1981 DeLorean that researchers from Stanford's Dynamic Design Lab customized into a self-driving electric car. Now, Jon Goh and Tushar Goel have augmented MARTY so it's capable of drifting through a complicated driving course with incredible precision. From Stanford: Conducting research in high-speed, complicated driving conditions like this is […]

In MobilBye: Attacking ADAS with Camera Spoofing, a group of Ben Gurion security researchers describe how they were able to defeat a Renault Captur's "Level 0" autopilot (Level 0 systems advise human drivers but do not directly operate cars) by following them with drones that projected images of fake roadsigns for a 100ms instant — […]

Bruce Sterling republishes the acronyms in a recent Daimler white-paper on self-driving cars: