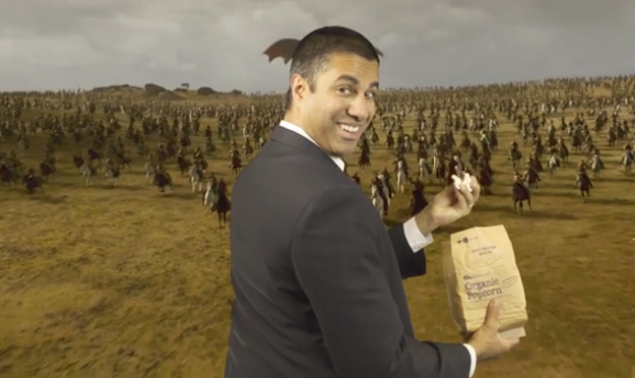 Donald Trump's FCC Chairman Ajit Pai made a terrible, unfunny video mocking the tens of millions of Net Neutrality advocates whose comments he has discarded (along with filings from the internet's inventors and leading scientists and engineers). The video was posted to the fringe-right website The Daily Caller.

As a way to convince people to get aboard his plan, it’s abysmal—no one’s arguing that we won’t be able to “’gram food” or watch Game Of Thrones when net neutrality passes; just that we’ll be at the whims of our already quasi-monopolistic ISPs when it comes to how much we’ll pay to do it (and how fast it’ll be when we do). But as a bit of textbook “smug asshole gloating,” it’s straight out of the playbook of his boss, Donald Trump, as we’re forced to watch this goofy jackass twist a fidget spinner and do the fucking Harlem Shake, even as he plots to strip protections from the most important technological advance of the modern era.