This is the potato chip grabber 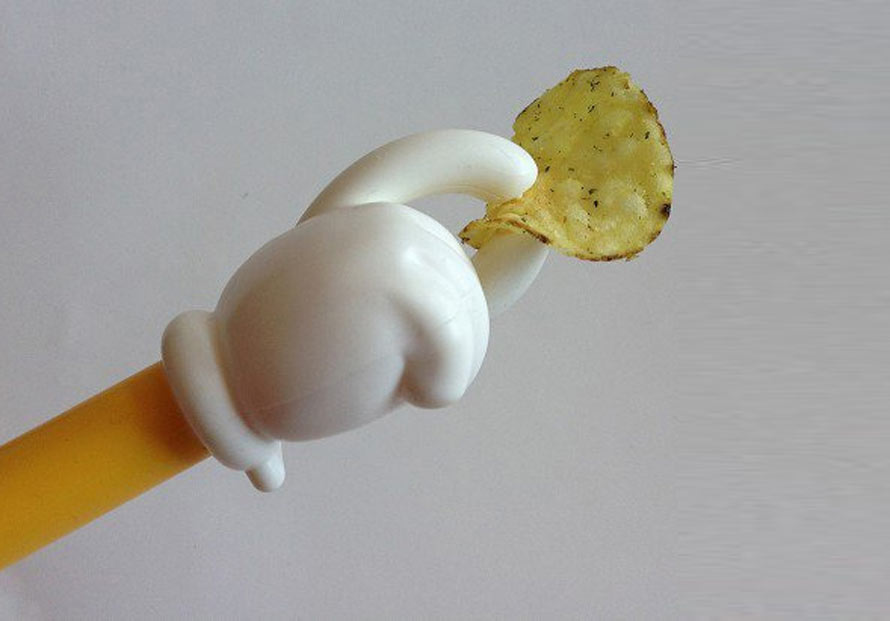 This little faux-gloved hand will pinch chips for you, so your own hands won't get greasy.

You don't need it, no one does, but if you have to know, this poorly-reviewed product is available for $4.24 on Amazon.

*NO Grease any more!Just the Way I Like:In common sense,many people like eating snacks like potato crisps while ussing computer.

* It directly leads to a very greasy hands and keyboard.

* The item designed like a just a hand,can use thumb and forefinger on the hand to control.

* when we want to eat crisp,just hold the rod of the hand,push the button,the thumb and the forefinger can be closed and pick up the crisps.

* In fact,just like our thumb and forefinger to pick up the crisps.

* The unique hold system inside allow to Apply the most appropriate strength on the chips to not let the crisp be broken.

* Therefore we got a elegant and healthy eating crisp way.

Today I learned that there's a brand of potato chips available in prison commissaries that are so good, they're almost worth being locked up for. They're called "The Whole Shabangs" and, until 2016, they were only available on the "inside." Now I Know: One inmate told NBC News that "The Whole Shabangs are a ray […]

We don't need to mourn Mr. Peanut because we still have Mr. Tayto Man

Still dapper, but less creepy capitalist. Mr. Tayto Man is nothing but love.

Here's something nobody asked for: Pringles-flavored instant ramen noodles**. Geekologie: To celebrate the 50th anniversary of Pringles and the 30th anniversary of Super Cup, the two are combining their brands Voltron-style to release two new flavors of Super Cup ramen noodles (Sour Cream and Onion and Jalapeno and Onion) and two new flavors of Pringles […]