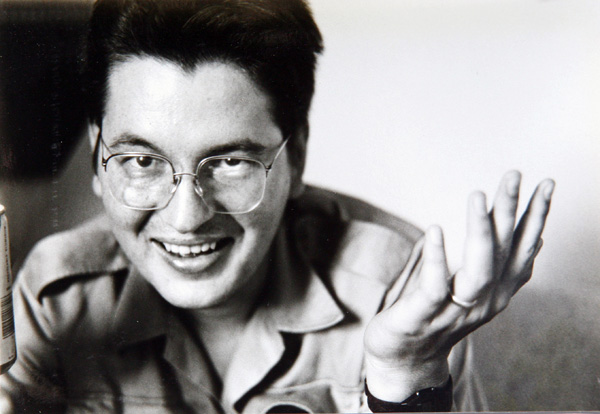 Every year, Bruce Sterling and Jon Lebkowsky take to The Well and conduct a weeks-long, wide-ranging "state of the world" discussion, trying to dig through to the zeitgeist's bedrock, taking questions from all comers (you don't need to be a WELL member to read, and you can send your questions in to Jonl).

This year, Bruce is in Ibiza, finishing a "long, difficult novel" and ruminating on the futurism of Dubai and Estonia.

I don’t believe either of them, but I’m always interested in people who make that claim — “We’re the future.” They’re not resentful in Dubai or Estonia, they’re not looking backward; that’s what I appreciate. They don’t yearn to make themselves great again, because they’ve never been great. They’re not trying to take back control of anything, because they never had any control.

Both Dubai and Estonia are in situations that, looked at objectively, are just chock-full of bloodthirsty menace. Estonia was crushed to paste by both Nazis and Stalinists, and Muslim fundies would cheerfully behead every soul in Dubai.

Yet boy, are they perky. It’s weird how upbeat, shiny, and future-evangelical they both are. Dubai and Estonia, these tiny countries, say and do things that look like they come from two other planets. I’m waiting for the day when they announce an alliance...

...Yeah, the e-residency E-Stonian thing interests me a lot, because it’s such a weird and deliberate hack of the European immigration problem.

Nations always “stand with” oppressed populations, but no nation really wants its population to physically stand next to migrants. Nobody abolishes passports and flings out the welcome mat for the planet’s sixty million refugees.

Even millionaire migrants, like the ones who flock to Ibiza here, seem to be getting more problematic, in strange ways.

It’s not just that the locals resent them; they do a little bit, but interestingly, the tourists don’t seem to like each other very much any more. They get off the boats, make a few discos while looking at screens, then get back on the boats. And those are the foreigners who cheerfully throw money around, instead of arriving with belt-bombs full of nails, to go stand somewhere in a crowd.

With e-residency, you’ve got the Estonians trying to play financial games with this new psychological situation somehow. They’re not creating a common offshore money-laundry, they’re aiming for technically talented Koreans, Ukrainians and such, who are using Estonia as a national cloud and a business services platform. And to get Euros and bank them.

There’s no pretense at all that “e-residents” are gonna integrate into Estonian society, or learn their impossible language, or ever live there, or even visit there. But it is an Estonian soft-power emanation. They seem to see it as some shareable aspect of their own predicament. “Would you, too, like to be Estonian? Well, this is as Estonian as we can possibly make you, without getting sticky stuff on us. Also: probably Russian-proof!”

The guys who run the e-residency program, who are Estonian government officials, are just a small cluster of wacky 30-something coders who work out of an old wrecked bakery. The offices of WHOLE EARTH REVIEW used to look better than their offices do.

Estonia also seems to be keen on national outer-space initiatives, which is endearingly Space Age of them. There aren’t many of them, but they’ve got charisma. Sometimes that’s all it takes.

David Wojnarowicz (1954-1992) is the most essential punk artist of the last century. In this Covid era, he's even more vital.