What youthquake? Jeremy Corbyn's election surge was drawn from all age groups, not a mob of first-time young voters 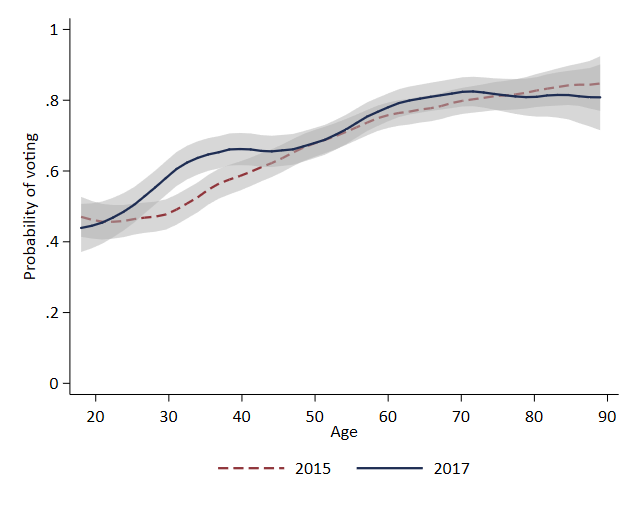 Jeremy Corbyn's incredible, odds-defying showing in the 2017 UK general election has been attributed to a "youthquake" of first-time young voters who were drawn to the polls by his progressive policies.

But an LSE study of election data shows that there was no significant turnout of first-time voters: instead, Corbyn flipped voters of all ages (except over-70s) for Labour.

The study uses data from the British Election Study (BES), "the gold standard measure of electoral behaviour in Britain since 1964," a face-to-face survey that is said to be immune to the sampling biases of phone and internet surveys.

The Conservatives are often portrayed as a greying party that only appeals to elderly, dwindling voters, and the fact that Labour flipped significant numbers of voters except for over-70s lends credence to this characterisation.

Why then did the idea that there was a surge in youth turnout take hold? In part it is because political commentary is prone to believing that what politicians set out to do is effective, even if there is no concrete evidence that it is. Increasing youth turnout was part of Corbyn’s political strategy. As Labour did unexpectedly well, it is not unreasonable to think that strategy might have paid off, even though this turns out not to be the case.

Labour also was more popular amongst young people than old people in 2017. The figure below shows the relationship between age and the likelihood of voting for Labour in 2015 and 2017. Although Labour’s share of the youth vote did increase, this is not the same as a surge in youth turnout. Labour was more popular amongst younger voters in 2015 as well and Labour’s popularity increased amongst all ages except for those over 70.

Did young voters turn out in droves for Corbyn? The myth of the 2017 youthquake election [Chris Prosser, Ed Fieldhouse, Jane Green, Jonathan Mellon, and Geoff Evans/LSE]

Tremors But No Youthquake: Measuring Changes in the Age and Turnout Gradients at the 2015 and 2017 British General Elections [Chris Prosser, Ed Fieldhouse, Jane Green, Jonathan Mellon, and Geoff Evans/LSE]